KEYWORDS cheese / milk / sales / sustainability / yogurt
Reprints
No Comments
Clean labels resonate with consumers. So do the claims “organic” and “zero fat” on product packages. Dairy processors respond to shoppers’ interest in where and how foods are produced by developing natural and organic products. After dipping 1% in 2009, organic dairy sales in the United States rebounded nicely in 2010. The category was up 9% (an additional $322 million for a value of $3.9 billion) and accounted for nearly 6% of the total U.S. market for dairy products, reports the Brattleboro, Vt.-based Organic Trade Association (OTA).

The association’s 2011 Organic Industry Survey showed very strong growth for organic milk and cream, as well as organic yogurt. The Innovation Center for U.S. Dairy, Rosemont, Ill., notes that research shows 43% of adults are interested in organic foods with dairy consumers having a higher interest than non-dairy consumers.

Some of the growth, says Barbara Haumann, OTA’s senior writer/editor, can be attributed to high conventional commodity prices since 2009, while organic pricing has remained relatively stable.

“Consumers who had previously traded down from organic to conventional are coming back to purchase organic,” explains Haumann. Consumers eating at home more often and the growth of sales of private-label dairy products also added to the increase.

“We are seeing more and more consumers choosing organic when it comes to dairy if they can afford it,” says Rostom Baghdassarian, chief operating officer of Karoun Dairies, Sun Valley, Calif. “If it is too expensive, they are choosing all-natural, clean ingredients, rBST-free dairy products. I believe the category is growing because consumers are becoming more conscious of what they eat. [They] are taking the extra steps of investigating where the product and its ingredients are coming from.” “Consumers are more and more interested in products they perceive as ‘better for you,’” says Eva Balazs, spokesperson for Buffalo, N.Y.-based Upstate Niagara Cooperative. “They reach for items with fewer ingredients and some actively avoid certain ingredients they identify as negative.”

One such ingredient is rBST (also known as bovine growth hormone), a synthetically produced hormone used to boost milk output in cattle. Although Balazs explains that research by the Food and Drug Administration, Washington, D.C., shows no significant difference in milk derived from rBST-treated and non-rBST-treated cows, she says, “milk produced without the use of synthetic hormones is becoming more the norm in the marketplace due to widespread demand.”

In April, the almost-400 member cooperative became one of the last in the country to ban rBST.

The International Dairy Foods Association’s position on rBST reiterates the FDA’s findings, and the IDFA’s website states that the association supports the constitutional right of dairy processors to make truthful and non-misleading claims on their labels. Last October, a federal court ruling in Ohio banned the state from forbidding processors to make labeling claims about rBST and dictate the placement of disclaimer statements. IDFA, Washington, D.C., originally filed the lawsuit in 2008 and filed its appeal in conjunction with the OTA.

“As a result of the ruling, processors may continue to label these products with accurate compositional claims, providing consumers with the products they want and the information they need to make informed decisions,” according to an IDFA press release.

While a 2009 report from The Hartman Group, Bellevue, Wash., (“Sustainability: The Rise of Consumer Responsibility”) found that 49% of respondents said “hormone-free” was an important label or phrase when selecting food and beverages. OTA’s Haumann says the term can be misleading as there is no such thing as hormone-free milk; all milk contains hormones.

Scott A. Rankin, associate professor and chair of the Food Science Department at the University of Wisconsin-Madison, Madison, Wis., says it behooves consumers to do their homework to make informed decisions and at the same time, it’s important for companies and brands to be clear and accurate in terms of what education they put out.

At Stonyfield Farm, Londonderry, N.H., Amy Elkes, brand program and consumer insights manager, says the company tries to be as transparent as possible, “using our website to show our consumers the farms - and introduce them to the farmers - where we source many of our ingredients. Giving shoppers what they want

Karoun Dairies is responding to customer demand for simple and natural ingredients with new products and packaging. Earlier this year, the company debuted a Mediterranean yogurt and a Mediterranean kefir cheese; a light cheese version will soon debut.

“All the health benefits (such as rBST-free, all-natural, probiotic, live and active cultures) are incorporated on the label and packaging,” Baghdassarian says. “Also, we have introduced our Indian Dairy line under the Gopi brand - Paneer cheese, Indian yogurts and Lassi yogurt drink.”

The company, notes Baghdassarian, is receiving more inquiries from consumers asking about the source of its milk and “what we put to culture or coagulate the milk.” Customers also ask about the source of the rennet or enzymes used in the cheese; if the rennet, enzymes or cultures used contain genetically modified organisms (GMO); how the cows are treated; do the cows pasture; and what is fed to the cows.

Lifeway Foods, Morton Grove, Ill., announced in April that its entire beverage line (probiotic kefir, frozen kefir, Helios, ProBugs and BioKefir) are enrolled in the non-profit Non-GMO Project. Once verified, the products will be able to be marketed under the non-GMO label.

In January, Stonyfield Farm re-branded its fat-free line as a 0% line. “We believe that consumers looking for a fat-free yogurt will more easily see our 0% fat positioning,” says Caroline Miron, brand manager, “and it definitely stands out more on the shelf.”

Manheim, Pa.-based Kreider Farms updated its milk labels this past year to include an rBST-free statement. In May, the company plans to launch a new upgraded ice cream container.

“It will state the ice cream is made using our own rBST-free milk and cream from our own cows,” explains Dave Andrews, vice president of sales and marketing. The old half-gallon container will be replaced by a 1.5 quart to better compete with others in the marketplace.

While consumers may not want synthetic hormones added to their dairy products, they are not opposed to other additives. OTA’s Haumann notes that a recent study (done in conjunction with KIWI Magazine) found that on average, more than six in 10 respondents said they would be more likely to buy an organic food fortified with any of the following: omega-3 (69%), calcium (67%), antioxidants (64%), vitamin D (63%) or probiotics (63%).

Kreider Farms’ Andrews says that perhaps even more important to consumers than what is, or isn’t, included in dairy products may be where it comes from.

The Innovation Center for U.S. Dairy finds that there is a growing trend among adult dairy consumers. “[They] are more interested in local and fresh foods compared with organic,” says Miriam Erickson Brown, chair of the Health and Wellness committee for the Innovation Center for U.S. Dairy. “Consumers are associating better taste, quality and healthier products with local foods and beverages. They also are associating key dairy equities such as nostalgia and real people with local products,” says Brown, who is also the chief executive officer of Anderson Erickson Dairy, Des Moines, Iowa.

April Miller is a Cleveland-based business writer. She wrote “The Ambassadors of Cheese” in the March 2011 Dairy Foods.

Danzeisen Dairy is a local treasure

Cheese: The Latest in Trends and Technology 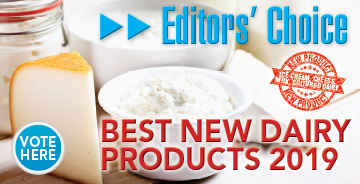