Danzeisen Dairy is a local treasure

Danzeisen Dairy aims not only to provide its Arizona neighbors with great-tasting milk, but also to embrace and give back to the local community

A growing number of food and beverage processors claim to be part of the local food movement. But for many of them, the definition of “local” is a bit of a stretch.

It’s definitely not a stretch for Phoenix-based Danzeisen Dairy LLC. The company’s own dairy farm in Phoenix’s Laveen neighborhood supplies the milk for its creamery, also located in Laveen. And Danzeisen Dairy’s products — milk, flavored milk, cream and half and half, all packaged in glass bottles — are sold in the creamery’s own store, as well as in 340 Arizona-area stores.

The family-run company sometimes refers to itself as “the microbrewery of the dairy industry,” explained Jeff Memmelaar, who heads up sales and marketing.

“We’re a smaller craft milk bottler. We focus 100% on taste and quality, “he said. “We use ‘40s, ‘50s and ‘60s bottling equipment. We use the old-style glass milk bottles to give it the best possible taste.”

Although the creamery officially commenced operations on Nov. 1, 2014, the wheels were really set in motion many years prior to that date — back when Kevin Danzeisen, general manager, was still a kid. His maternal grandparents, Neil and Gertrude Viss, operated the Neil Viss dairy farm in Phoenix.

“Growing up, we’d come out to Arizona to come visit my grandma and grandpa on their dairy farm — I remember getting off the plane in December and just loving Arizona,” he said. “I’ve always loved cows, too.”

In fact, Danzeisen loves cows — and dairies — so much that he ended up working on several dairy farms during high school, as well as for two years following his graduation. He then ventured off to college to study dairy science and business.

In 2000, Danzeisen and his father Clayton — a retired school teacher and now Danzeisen Dairy’s chief financial officer — moved from California to Phoenix to help run the dairy farm for Gertrude Viss. They purchased the cows from her in 2002 and renamed the operation Danzeisen Dairy. Like the original dairy, Danzeisen Dairy opted to be part of the United Dairyman of Arizona (UDA) cooperative.

“UDA has been a huge supporter of us,” Danzeisen noted.

In the years between the purchase and the opening of the creamery, the dairy operation overcame challenges ranging from declining milk prices to an overabundance of cows. But it persevered, eventually striking a balance with about 2,200 cows and striving to find the right business model for success. The lightbulb moment came, Danzeisen said, when he and his family saw an opportunity to provide milk in glass bottles to local Phoenix neighbors.

“We thought that was a way we could bring that old-school feel back to our community and our customers, and we could create our own little niche market here in Phoenix,” Danzeisen said.

The Danzeisen Dairy creamery opened up shop in a former Volvo equipment dealership retrofitted for fluid milk operations. And the timing was right. In 2013 and 2014, the whole local movement was really starting to catch on in Arizona, Danzeisen noted.

Social media helped in the beginning, too, as Danzeisen Dairy commenced opening-day operations without a single retail or foodservice customer.

“All we had was a little Facebook page with 1,000 followers,” Danzeisen said. “We told them that we were going to start, and there was a line coming into this building. We sold our first bottle within 15 minutes after it came off the line.”

Champion of great milk — and the environment

Today, the creamery produces white milk (whole, 2%, 1% and skim); 2% milk in chocolate, strawberry, root beer, cold brew coffee and Arizona orange flavors; heavy cream; half & half; and seasonally available egg nog — in options that range from single-serve to half-gallon sizes. Most of those products have been available since the very beginning, although Danzeisen said the company did change up its flavored milk formulas a couple of times.

“The cold brew coffee flavor used to be a mocha, and we really didn’t like the final product,” he explained.

To develop some of the other milk flavors, the company sought out help from a family friend who’s also the owner of Scooptacular, a local ice cream shop. He had the expertise to know what would work and what wouldn’t, Danzeisen said, and helped to create products using all-natural flavors and colors.

Along the way, the Danzeisen family did plenty of taste-testing to ensure the company would deliver the best-tasting finished products. (Other family members work for the company, too — Danzeisen’s brother Brett handles transportation, while his mom, Gail, helps out in the creamery store.)

About a year ago, Danzeisen Dairy added butter to its repertoire — in varieties that include plain salted, rosemary garlic and cinnamon sugar. Right now, the butter is sold only in the creamery’s store and in about a dozen local grocery stores. Like all of the milk products, the butter comes in glass containers — in this case, jars.

“We realized all of the benefits of having our milk in a glass bottle, and I think our products going forward will use glass packaging as much as possible,” Memmelaar stated.

Those benefits include excellent milk products.

Glass is also a better insulator than plastic or cardboard, Memmelaar pointed out.

“In Arizona, that’s especially important since it’s so hot here,” he said. ”If you have a bottle of Danzeisen milk sitting out on your kitchen table, it’s going to stay colder longer, and that’s going to improve the taste, also.”

But product taste wasn’t the only reason the company opted for glass. Environmental concerns were a deciding factor, too.

“As we got into more research, we found that there’s 8 million tons of plastic that goes into the oceans worldwide every single year, and 2 million tons go into U.S. landfills every year,” Danzeisen said. “It has to stop at some point, and glass bottles do that. They’re refillable.”

For Danzeisen Dairy, the commitment to local goes well beyond the products it processes and sells.

“We want to be a local community partner, too,” Danzeisen stressed. “It’s a two-way street: The community supports us, and we support the community.”

For example, the company sponsors teams in a children’s recreational soccer league, and Memmelaar volunteers as a soccer coach. And in lieu of hosting a traditional Christmas party, Danzeisen Dairy rents a bus to transport its employees and families to the annual Ignite Hope fundraiser and celebration for Phoenix Children’s Hospital.

Danzeisen Dairy also has strong partnerships with two of Phoenix’s professional sports teams — the Arizona Cardinals and the Arizona Diamondbacks. While the company packages most of its milk products in glass bottles that tout “local” in large print, some of its products get bottles sporting team logos and words to cheer the teams on during their respective seasons.

“When the Arizona Diamondbacks made the post-season this year, we made a Celebrate 2017 bottle,” Danzeisen noted.

But the partnerships involve more than special bottles. For example, Danzeisen Dairy sponsors the Cardinals Cruiser, accompanying Cardinals team members — or Big Red, the mascot — at functions that benefit or entertain the community. And through the Diamondbacks, the company sponsors a kids club.

But perhaps the greatest contribution Danzeisen Dairy brings to the community is the support it provides to local startup companies. Just about every Saturday, Phoenix-area folks are invited to visit the creamery’s community center — a large but homey room located at the front of the creamery that features tables made from mango wood — to check out offerings from a newish local vendor. Danzeisen Dairy promotes the event via Facebook and Instagram.

The products range from locally made baked goods to locally made honey. They are also sold from time to time in the creamery’s store, which is located at the front of the facility, too.

The local community definitely has embraced Danzeisen Dairy during its first three-plus years of operation. Case in point: The company’s original Facebook fan base of 1,000 has grown to 20,000-plus, and the creamery continues to gain new retail and foodservice customers.

However, the small family-run company does face a few challenges going forward. The most significant among them are declining milk sales.

“From a product standpoint, fluid milk sales have been going down, down, down — that’s an industrywide problem,” Danzeisen pointed out.

But the company is determined to be part of the solution to that challenge, he said.

In its quest to grow, Danzeisen Dairy also must find ways to combat the sea of milk-related misinformation — all negative — being communicated online.

“We’re not immune to that,” Danzeisen said. “So getting the truth out there and conveying it in a non-combative way is going to be a challenge.”

But this local treasure certainly seems up to the task.

“When people in Arizona sit down for dinner at night, we want them to drink milk again,” Danzeisen stressed. “Preferably, we would like it to be Danzeisen Dairy milk in a glass bottle.”

Showing its cows some love

Danzeisen Dairy is unique not only for its glass bottles and craft approach to milk making, but also for the special care it provides to its cows. All cows and heifers are fed an alfalfa-based diet balanced with the right amount of proteins and minerals. No growth hormones are used.

A specialized veterinarian visits the dairy weekly to monitor the health of the cows, while a cow nutritionist checks the feed at the dairy every month. 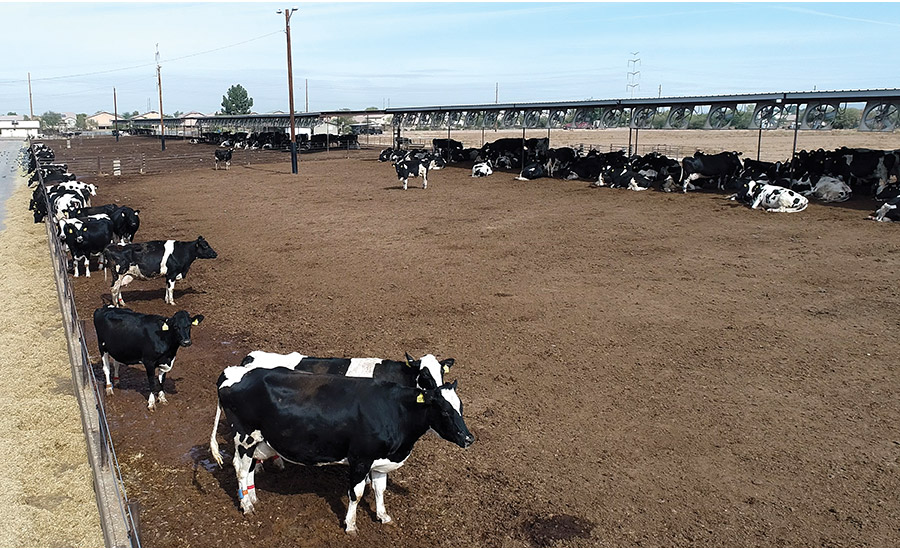 The cows’ wellbeing is very important to Danzeisen Dairy.

In addition, each cow is fitted with a pedometer that measures the steps it takes each day. When one of the cows strays notably from its step average, it is removed from the herd and checked out thoroughly, explained George Torres, the dairy’s manager.

“As we become more profitable on the creamery side, a lot of money is put back into the cows on the dairy side,” added Jeff Memmelaar, who’s in charge of sales and marketing for the company.

Kathie Canning, Former editor-in-chief of Dairy Foods, is an award-winning journalist with more than 20 years of experience in the trade publication sector. Her experience includes leadership positions on a number of food and beverage publications for both processor and retail audiences. She is a graduate of the University of Toledo and is also certified as an Editor in the Life Sciences by the Board of Editors in the Life Sciences.

Vermont Creamery is gearing up for growth

A turnaround for aseptic juices at retail