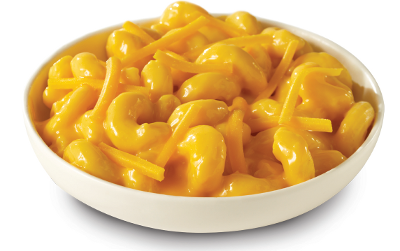 Macaroni and cheese made with white Vermont Cheddar cheese; sweet potatoes topped with a buttery cinnamon spread; and chili cheese fries smothered in a sauce made with Cheddar cheese and real milk are on the menu of Wendy's restaurants. The three dishes are known as Signature Sides. The mac and cheese and the baked sweet potato are available for a limited time. The chili cheese fries are a permanent addition to the Wendy's menu. Each is priced at $2.49.
Also this week, T.G.I. Friday's introduced new menu items, including some featuring dairy foods. The items include Loaded Skillet Chip Nachos, White Cheddar Spicy Beef Queso, Ice Cream Strawberry Shortcake and Tomato Mozzarella Salad . In all, there are 17 new dishes.
My view: All this cheese makes me forget Clara Peller (the actress who yelled the catch phrase "Where's the beef?" )

Stop & Shop stores in much of New England are holding a fundraising day on Saturday, April 28 to benefit pediatric brain tumor research. Several Nestle USA brands will offer a free single-serve ice cream cup to customers donating $1 to the Stop & Shop Family Pediatric Brain Tumor Clinic at Dana-Farber Cancer Institute. Brands include Haagen-Dazs, Edy's Slow Churned light ice cream, and Skinny Cow low-fat ice cream. In addition, Edy's will donate $.05 for every single-serve cup, shake or smoothie sold between April 13 and June 7, 2012, with no limitation on the amount donated during this timeframe. Last year, Edy's raised $186,000.
My view: I can't say enough about the good work done by Dana-Farber Cancer Institute, which treated my buddy back in my junior high school days. Hats off to Nestle for its support.

Speaking of the Swiss-owned dairy and food company, DPA/Nestlé is Brazil's largest dairy processor, accounting for 9.8% of the total milk processed in the nation 2011 (22.4 million ton). The No. 2 spot goes to LBR – Lácteos Brasil with 7.8% of the purchases. According to the Brazilian Institute of Geography and Statistics, the volume of milk intake by the Brazilian industry increased 3.9% in 2011 compared to 2010. Among the 12 largest dairy-food companies, the quantity decreased 0.4% in 2011.

TABS Group found a significant increase in American consumers reporting they purchased organic products and a jump in overall sales. Specifically, the percentage of all consumers stating they purchased organics rose from 39.8% in January 2011 to 41.8% in January 2012, a 5% increase, according to Dr. Kurt Jetta, TABS Group CEO.
The TABS Group Organic Product Survey was conducted among 1,000 representative respondents aged 18-75.
Total organic product sales rose approximately 15 to 20%. The survey also found an 11% increase in the number of product types purchased by a typical organic shopper. Increased penetration for organic products, particularly staples like milk, eggs, meat and vegetables, signifies that consumers are finding more room in their budget to afford higher price points associated with organic products, the group said. Organic ice cream sales increased 44% and milk was up 25%. Younger consumers expressed greater preference for organic products, with 48% of respondents under 40 years reporting usage in the last six months compared with only 34% of consumers above 60. Those under 30 bought on average 4.6 different organic products compared with 2.9 different products purchased by people 60 and older.
My view: This just points up how interested consumers are in how food is made and where it comes from. Don't ignore this.

The Milk Processor Education Program (MilkPEP) said good-bye to SiboneyUSA as its Hispanic-marketing agency of record, and hello to MGSCOMM. Siboney will be closing.
“Siboney was integral in helping MilkPEP tap into the mindset of the Hispanic consumer and successfully raise the profile of milk in Hispanic households,” said MilkPEP CEO Vivien Godfrey. “Although we are saddened by their closure, we are looking forward to continuing outreach to Hispanic consumers about milk’s benefits.”
MGSCOMM is one of the top independent Hispanic-owned communications firms. It a full-service, communications company providing traditional advertising services including, strategic planning, research, media planning, buying, creative development as well as a broad range of specialized public relations, digital and social media services.
"We are delighted to announce that MGSCOMM will direct the strategic and creative development for MilkPEP across all marketing channels reaching Hispanic audiences,” said Godfrey.
My view: Milk processors need to take advantage of the marketing programs, resources and collateral of MilkPEP.

Yogurt retailer Pinkberry is entering India. The company says the move underscores its "commitment to globally expand into markets where yogurt is an integral part of the region's culture." Pinkberry is partnering with Mumbai-based JSM Corp., a multi-unit restaurant and casual dining development organization.

But enough about me. Share your views and comments below.