This website requires certain cookies to work and uses other cookies to help you have the best experience. By visiting this website, certain cookies have already been set, which you may delete and block. By closing this message or continuing to use our site, you agree to the use of cookies. Visit our updated privacy and cookie policy to learn more.
Home » An Aussie dairy hops into California with a premium-priced A2 milk said to offer a ‘digestive advantage’
Dairy Processor NewsNew Dairy Products
Et tu, value-added?

Australia’s a2 Milk Co. said it will expand the dairy industry’s user base by bringing back consumers who turned away from cow’s milk because of digestive issues. 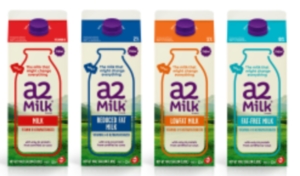 Move over, high-protein and organic milks. There is a new value-added milk in the dairy case. Starting in April, Australia’s a2 Milk Co. will begin selling milk with what it calls a “digestive advantage” in California supermarkets and independent stores.

The milk is available in whole, 2%, 1% and nonfat varieties. The suggested retail price is $4.50, which is more than a store brand of conventional milk but less than organic milk in some markets. The U.S. weighted average advertised price of a half-gallon of organic milk in 2014 was $3.38, according to USDA’s Dairy Market News. (Dairy Foods sees current prices of greater than $5 in the Chicago area.) A gallon of whole milk retailed for $3.758 in January, according to the Bureau of Labor Statistics.

Marketing Director Jim Smith told Dairy Foods that the milk is sourced from dairy farms in the eastern United States. That is also where the milk is processed for extended-shelf-life by a co-packer. The paper half-gallons are shipped to California. The company introduced the product at the Natural Products Expo West in Anaheim, Calif., last week.

How does A2 milk differ from other milk?

What is A2 milk? According to the National Dairy Council, the casein portion of dairy protein includes two components called A1 beta-casein and A2 beta-casein. Milk available in the United States usually contains an equal mix of A1 and A2 beta-caseins. However, there are certain cow breeds that mostly provide milk with A2 beta-casein which is sometimes called A2 milk.

Smith said the cows that produce only A2 are placed into special herds and milked separately to ensure the integrity of the milk.

According to a company statement, the A2 protein is naturally occurring and is not the result of a technological process or genetic engineering. The company states that studies suggest that some of the reported difficulty in digesting milk might be caused by an intolerance to the A1 protein, which is found in most of the milk sold in the United States. It says many people find milk from A2 cows is easier to digest than ordinary milk, because of the lack of the A1 protein.

Smith said the marketing proposition of a2 milk is that it will bring people back to dairy, especially those who have “digestive discomfort” after consuming milk. He said these individuals might be reacting to the A1 protein found in conventional milk, not lactose. A2 milk also contains lactose..

a2 Milk Co. Nutrition Director Bonnie Johnson told Dairy Foods that the company wants those who gave up dairy milk in favor of plant-based milks (like soy or almond) to return to the dairy category. She said these former dairy-milk drinkers suffered from “post-dairy digestive discomfort,” manifested as gas, bloating, stomach cramps and loose stools. An on-pack claim says the milk “may be easier to digest.” The label was reviewed an approved by the California Department of Agriculture, she said.

Are the benefits of A2 milk fact or marketing hype?

Not everyone buys into the benefits of A2 milk. A Q&A fact sheet from the NDC obtained by Dairy Foods states “there is no known functional benefit or health benefit associated with A2 milk that would make it better than other milk options.” It further states “there is no conclusive scientific evidence linking A2 milk to any health benefits beyond those of regular milk. All milk contains a complete nutrient package of nine essential nutrients.”

Johnson, a registered dietician who once worked at the NDC, said there are more than 100 studies that support the company’s hypothesis. She said a human study by Curtin University’s School of Public Health in Australia (published in the European Journal of Clinical Nutrition in 2014) found that A1 beta-casein protein digests differently than A2.

Keith Woodford wrote about the proteins and cow breeds in his 2007 book “Devil in the Milk: Illness, Health and the Politics of A1 and A2 Milk.” It’s a favorite of alternative medicine and natural foods followers. He linked drinking A1 milk to heart disease and Type 1 diabetes. At one time Woodford consulted with a2 Milk Co. but he is no longer affiliated with it, Johnson said.

According to a company press release, a2 milk “has changed the face of the milk category in Australia.” The company states it is the leading premium milk brand in the country and accounts for nearly 10% of the market by value. The brand also sells the milk in New Zealand and the United Kingdom and it is available as an infant formula in China.

The a2 Milk Co. is listed on the New Zealand stock exchange and will soon be listed on the Australian exchange. The U.S. headquarters is in Boulder, Colo. Smith said the area has “bright energetic people with the right experience” who match up with a2 Milk Co.’s nutrition focus.

Dairies, creameries and cheesemakers taught me a lot about dairy processing

Schuman Cheese has a passion for Parmesan

Arla pumps up its sales team to grow the business

Dairy processing equipment: an efficient SSHE with a small footprint

8 things to do with a cup of milk