A new Liz Lemon flavor was introduced to celebrate the finale of the NBC series 30 Rock. 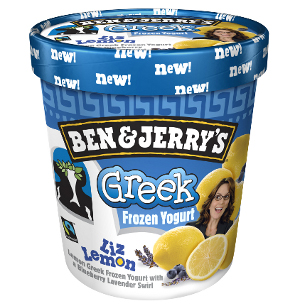 The frozen dessert is made of lemon Greek frozen yogurt with a blueberry lavender swirl. It's said to be sweet and tart, much like the Liz Lemon character that its named after, according to a Ben & Jerry's press release.

The flavor will officially arrive in Ben & Jerry’s scoop shops around the country over the next few weeks and will be available in grocery and convenience stores shortly after. This new flavor was also created to raise awareness of and assist Jumpstart, a national early education organization that Tina Fey (the actress who played Liz Lemon on the show) has supported.

The Liz Lemon flavor joins the other four Greek frozen yogurt flavors that were added to the company's line last year. For more information on Ben & Jerry’s or to find a local Scoop Shop, visit www.benjerry.com. Ben & Jerry's, Burlington, Vt., is a subsidiary of Unilever.

Got a new product to contribute? Submit it to Dairy Foods here.