This website requires certain cookies to work and uses other cookies to help you have the best experience. By visiting this website, certain cookies have already been set, which you may delete and block. By closing this message or continuing to use our site, you agree to the use of cookies. Visit our updated privacy and cookie policy to learn more.
Home » Dannon launches new ‘bro-gurt’ - Oikos Triple Zero
Dairy Foods & BeveragesCultured DairyNew Dairy Products
Greek yogurt

The latest high-protein Greek yogurt has no added sugars, no artificial sweeteners and fat. 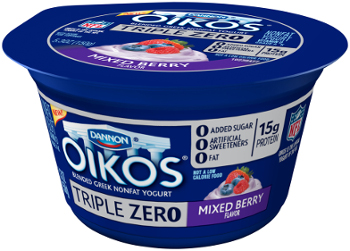 In an effort to engage with a wider audience, the brand became the official yogurt of the NFL and introduced this product that appeals equally to both men and women, according to the company. Through its marketing efforts, Dannon is changing the current market where yogurt is disproportionately consumed by women as compared to men.

In a new advertising campaign that began on January 12, Dannon and Carolina Panthers quarterback, Cam Newton, encouraged consumers to look beyond traditional staples for protein. Dannon will be supporting the launch of the product with a multi-million dollar media investment. With the goal of expanding its once predominantly female consumer, the brand will be exploring integrated partnerships with television networks with a high male viewership. The brand will also be a presenting sponsor of various NFL network shows.

Dannon is a subsidiary of Danone.