This website requires certain cookies to work and uses other cookies to help you have the best experience. By visiting this website, certain cookies have already been set, which you may delete and block. By closing this message or continuing to use our site, you agree to the use of cookies. Visit our updated privacy and cookie policy to learn more.
Home » Two ice cream processors turn 100. What’s a birthday party without ice cream?
Dairy Processor News
Ice cream processors 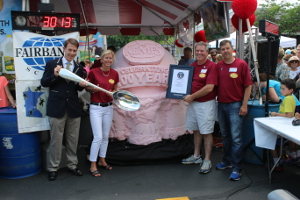 Kemps, St. Paul, Minn., celebrates its 100-year anniversary this year. The company traces its roots to an ice cream and candy business founded by William Henry Kemps in 1914. Today, it is a division of Dairy Farmers of America, the cooperative based in Kansas City, Mo., that bought the company in 2011 from HP Hood, Lynnfield, Mass.

Though milk accounts for half of Kemps revenues, the next largest category is ice cream. CEO Greg Kurr called frozen desserts a “strategic pillar” in Kemps’ national growth plans. Its products are already sold across the United States in major supermarket chains.

To commemorate its 100th anniversary, Kemps Dairy set a Guinness World Record on June 28, 2014 for producing the “World’s Largest Ice Cream Scoop,” when it carved 733 containers worth of strawberry ice cream (equal to the length of a football field of the frozen dessert) into a gigantic scoop at the Cedarburg Strawberry Festival outside of Milwaukee, Wis. Carved by five nationally-ranked snow sculptors from Minnesota Big Snow, the Guinness World Record-setting ice cream scoop weighed-in at 3,010 pounds, as verified by famed Guinness World Records’ judge Philip Robertson.

Learn more about Kemps and its 100 years here, and go behind the scenes in its ice cream plant in Minnesota here. 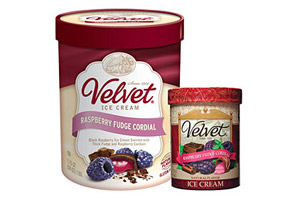 In 1914, Joseph Dager started making ice cream in the basement of a confectionery store in Utica, Ohio. He had arrived in the United States in 1903 at age 15, unable to speak English. Now he was following his dream by making an all-American product: ice cream. He started with just three flavors: vanilla, chocolate and strawberry.

One hundred years later, Velvet Ice Cream is now run by the fourth generation of the Dager family. Luconda is president and sisters Joanne and Andre Dager are vice presidents.

Last year, as Velvet neared its centennial, the company decided to focus on rebranding and redesigning its packaging to find a stronger market presence. As Luconda writes in a guest blog for Dairy Foods: “Our greatest challenge would be to hold on to the rich heritage of Velvet Ice Cream, while evolving the brand to appeal to a more youthful audience. There’s a delicate balance between those two universes. We’re stewards of a brand that has a large following of incredibly loyal customers. Our brand is their brand. And our story is part of theirs”

The end result was a fresh, new package design that gave the company a stronger presence on retail shelves, while staying true to its history. In a nod to the company’s heritage, the package depicts Ye Olde Mill, a historic grist mill attached to the factory where Velvet makes its products.

Read more about the company’s packaging design changes in this guest blog, “Velvet Ice cream focuses on telling its story.”

Ice Cream and Politicians, What a Pair!