Yogurt processors are using three-compartment packages that permit wider options in terms of the number and type of ingredients that can be offered.

Fruit flavors dominate the yogurt market, featuring in over two-thirds of global launches recorded by Innova Market Insights in the 12 months to the end of March 2013, rising to three-quarters of the U.S. total and nearly 70% in Latin America. 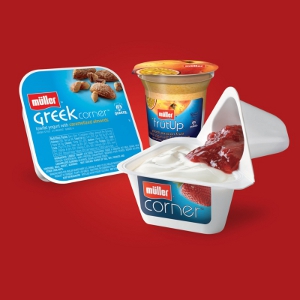 This encompasses a wide range of different types of fruit, from more traditional strawberry and peach to more unusual such as papaya, damson and coconut. Plain, natural or unflavored yogurts are the second most popular option globally, featuring in about 12% of introductions, but again this varies, depending on regional and cultural preferences for plain yogurt, with levels rising to over 22% in Asia, but falling to less than 5% in the United States. Brown flavors, such as chocolate and caramel, took third place globally, ahead of vanilla.

Innova's Director of Innovation Lu Ann Williams said “The yogurt market is generally showing good growth, and this is reflected in terms of new product activity, where levels are continuing to rise globally. With an increasingly competitive marketplace, the need for product differentiation has led to developments in flavors over recent years, most notably into more upmarket and complex options, often featuring a number of different ingredients, sometimes with formulations taken from other sectors of the market, such as desserts, bakery and confectionery.”

She also notes that companies are trying to ring in the changes with increasing numbers of limited-edition and seasonal options.

The split-pot concept has helped to move the level of flavor sophistication forward. This has allowed for the addition of sauces and purees, as well as inclusions such as chocolate or mini-biscuits, which can be used with plain or flavored yogurt to add further interest in terms of texture.

Ehrmann has been a leader in this area with its Almighurt Nach Herzenslust (for our Heart’s Desire) range, first launched in Germany in 2011 in a heart-shaped three-compartment pot. The latest addition to the range in 2013 is Zitronen-Käsekuchen & Knusperwaffeln (Lemon Cheesecake with Crispy Wafers) variant. This features vanilla yogurt in the main pot, and lemon sauce and crisp wafer pieces in the two smaller pots.

Meanwhile, flavor trends in the yogurt market in 2013 seem to be following a similar path to recent years, with the exotic, unusual and more complex featuring strongly across a range of countries. In the U.K., Collective Dairy has even added value to a new natural yogurt variant sweetened with honey, by giving it its own identity under the Plain Jane name. Other range extensions featured the more exotic and upmarket, including Banoffi and White Peach & Raspberry, while a limited-edition Papaya & Coconut variant replaced the previous Mighty Mango line.