Powerful Yogurt, Miami Beach, Fl., is the first Greek yogurt in the U.S. designed for men. The product is differentiated from existing Greek yogurts by its 20 to 25 grams of natural protein per serving. It’s sold in a “man-sized” 8-ounce cup that is 33% larger than most individual-serving Greek yogurts. The marketing and black and red packaging is designed to target active male consumers. 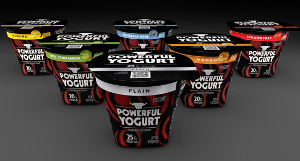 With its high protein content and seven active cultures, Powerful Yogurt is supposed to help men build muscle, burn fat and improve digestive health, according to the company. The product is fat-free and gluten-free, kosher and made with no GMO ingredients.

All six flavors — plain, banana, blueberry açai, strawberry, apple cinnamon and mango — are currently available at grocery stores across New York, Connecticut and New Jersey. The suggested retail price is $2.99. The yogurt is co-packed for the company in upstate New York.

The company officially launched its new yogurt line at the Natural Foods Expo West tradeshow in March. Powerful Yogurt recently earned three award nominations across the dairy, natural food and gourmet categories, including the 2013 Dairy Innovation Award from FoodBev Media, as well as nominations for the 2013 Gourmet Product Awards and the 2013 Natural Product Awards.