Hood gets into the Greek frozen yogurt game 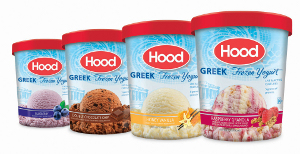 While competitive product is sold in pints, Hood is packaging the frozen yogurt in quarts, with a suggested retail price of $3.99 per container. Each serving of Hood Greek frozen yogurt has five grams of protein.It is made with live and active cultures.