Ruby Jewel equipment upgrades help it stand out from the competition

The first step to success at Portland, Ore.-based Ruby’s Jewel’s 7-year-old plant, known as “Sandwich City,” is education. It has a commercial kitchen as part of its production facility, which is where the company creates the flavorings it uses for its ice cream sandwiches. For example, Ruby Jewel designs its own flavorings for use in its butterscotch and caramel ice creams.

“It is unique at our size that those things are still being produced in-house,” says Steve Panos, Ruby Jewel’s director of operations, who has served the company for more than five years. “We experimented with co-packers but did not like the finished product and loss of control regarding how we want to make the product.”

Once the flavorings are produced, they are moved into refrigerated storage until it’s time to blend a particular batch of ice cream. When blending ice cream, Ruby Jewel takes a pre-pasteurized base that it receives from a local dairy partner who produces the ice cream base to its specifications.

Subsequently, Ruby Jewel, founded in 2004, takes the base, blends it with the flavorings it produces, and incorporates it into a continuous freezer (see below for more) that it recently added to its process and deposits the ice cream onto a cookie. It is then topped with soft ice cream by an automated-depositer and transferred through a liquid nitrogen continuous freezer.

It takes just a few minutes of dwell time to get the product to minus -50 degrees Fahrenheit and then the product is bagged, which the company is now doing on automated basis, following the receipt of new equipment in late August.

The ice cream sandwich then gets packed in the warehouse into a master case and palletized for shipping, Panos says.

Of course, the taste of its ice cream sandwiches are the key differentiator for Ruby Jewel. But the company further differentiates itself from competitors in other ways, namely the use of all-butter wire-cut cookies combined with super-premium ice cream packed into a bottom-gusset or stand-up pouch (SUP). Most competitors use an oil-based recipe for their rotary dye cookies, as well as cheaper flow-wrap packaging, the company states.

“Rotary dye is fine, but everything looks the same, because it looks like it came from a machine,” states Eric Koppelman, Ruby Jewel’s CEO. “Wire cut is more like how you would make a cookie at home with your kids. You get more of a natural spread and the cookies look different. Machines don’t like that, but consumers do. It is a better-quality cookie and it looks like a premium product.”

Ruby Jewel manually handles the all-butter wire-cut cookies it gets from partner bakeries.

Panos adds the company is very excited about the packaging solution in place because it allows Ruby Jewel ice cream sandwiches to stand up on a shelf, as opposed to competitor products’ flow wrap that fall over or lay flat.

“It is very important as part of our growth plan to have a premium, self-serve package,” Panos asserts. “It really stands out on shelves.” 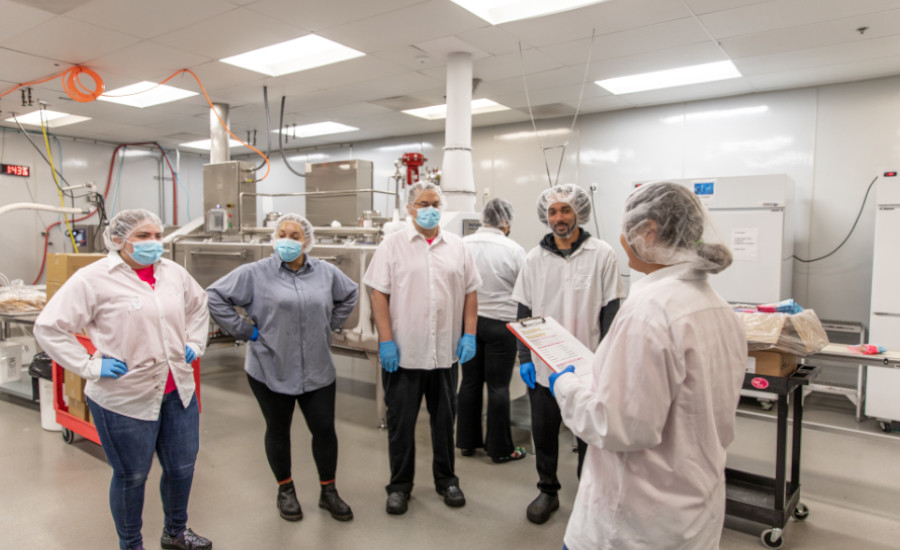 Ruby Jewel has been in its aforementioned “Sandwich City” manufacturing facility, spanning 10,000 square feet, for seven years. Approximately 60% of plant space is devoted to production and warehousing, with the remainder devoted to office space, Panos says. Often, there are 16 to 20 employees working at the plant but can max out at up to 38 employees when the company runs double shifts.

Ruby Jewel has made multiple major equipment additions in recent years and continues to seek solutions to optimize efficiency and reduce waste.

In fact, one recent upgrade delivered a major reduction in power consumption. After receiving COVID-19 pandemic relief funds plus cash incentives from Energy Trust of Oregon, Panos replaced the one-size-fits-all mechanical controls of a multi-freezer system with a new control panel, designed by National Energy Conservers Inc., which runs on smart software and activates as needed.

“That was one silver lining of the pandemic for us. We had been approached by a company that specializes in energy saving, freezer management programming, and controls a few years prior to the pandemic,” recalls Panos. “They offered specialized controllers for industrial freezer equipment that greatly reduce the energy needed to run that equipment.” 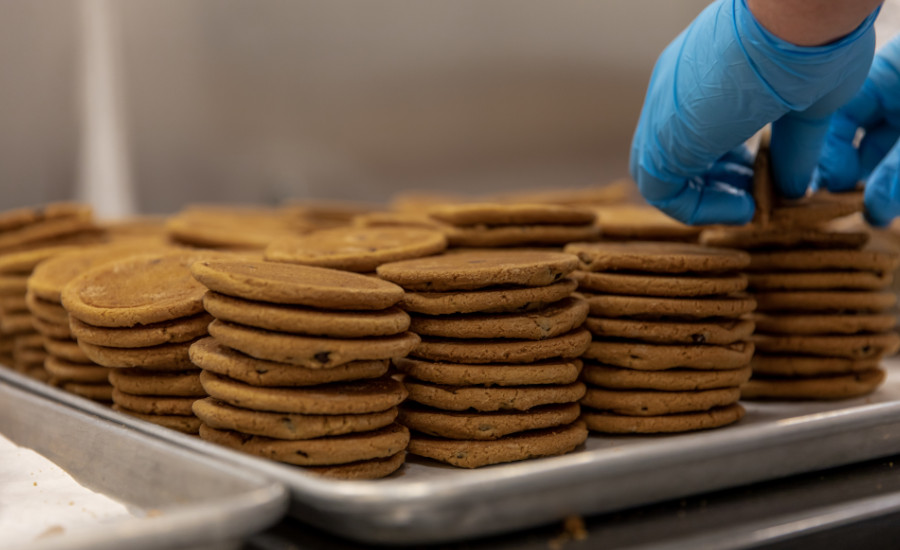 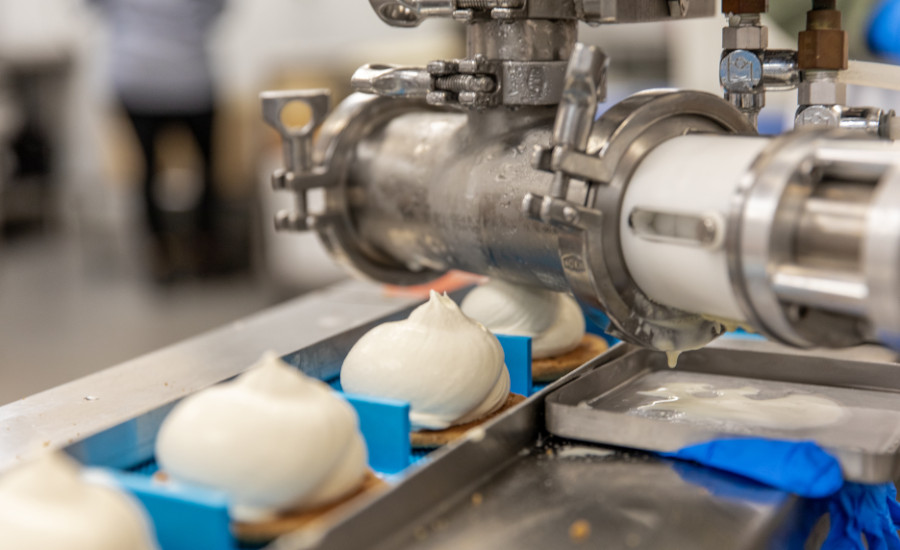 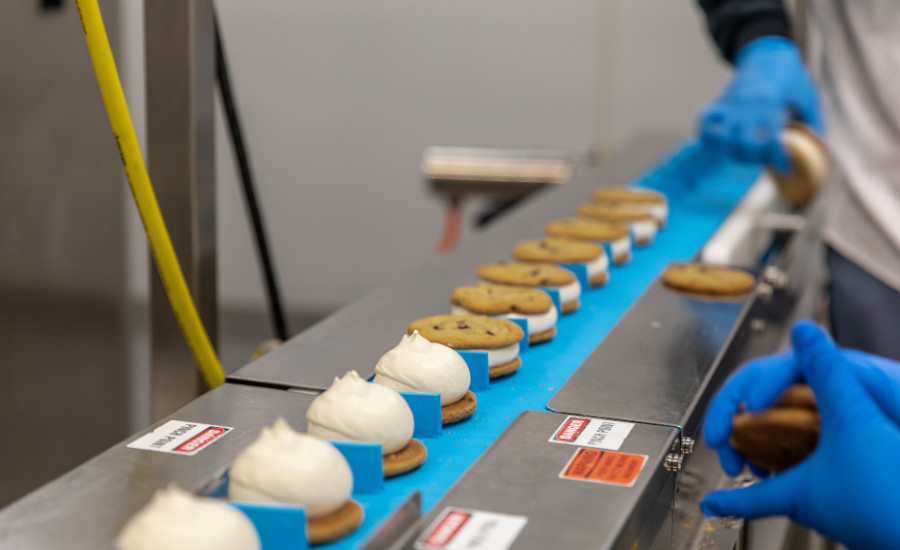 However, the capital expenditure still had to make sense for Ruby Jewel. But, the pandemic changed everything when the Energy Trust of Oregon offered what amounted to a 100% subsidy on the upgraded controls.

“At that point, there was no reason not to give it a shot,” Panos says. “It worked better than advertised. You could immediately see the reduction in energy usage, which is evident by the fact the freezers are not running half the time.”

Perhaps as important for Ruby Jewel is that the controllers significantly increased the number of sensors for monitoring different parameters of the freezer operation and greatly reduced temperature fluctuations in the storage environment, which is key for ice cream sandwiches.

“You don’t want water migrating through the ice cream during temperature fluctuations. That can affect the texture and shelf life of the ice cream,” Panos mentions. “It also greatly reduced the wear and tear in equipment, which we could see with a reduction on our repair and maintenance bills.”

To keep operations humming along, Ruby Jewel likes to implement one or two new pieces of equipment per year in an effort to produce the ultimate ice cream sandwich-making line, Panos adds.

“Four years ago, we put in a liquid nitrogen freezing tunnel. Two years ago, we put in a continuous freezer and depositing line. We just added the new packaging equipment we are really excited about,” Panos mentions. “Our next big aspiration is to become a licensed dairy facility. We’re currently licensed as a frozen dessert manufacturer by the ODA (Oregon Department of Agriculture) and we can generate significant cost savings by pasteurizing our dairy base on-site.”

Panos stresses Ruby Jewel loves its current dairy partners, and it would not have reached its current level of success without them. But long-term, the company wants to take that extra level of control back into its facility.

“We are exploring the equipment we would need to make that happen,” Panos states. “It is a big step forward in terms of complexity of operations, but we are excited about the potential of becoming a pasteurized dairy facility.” 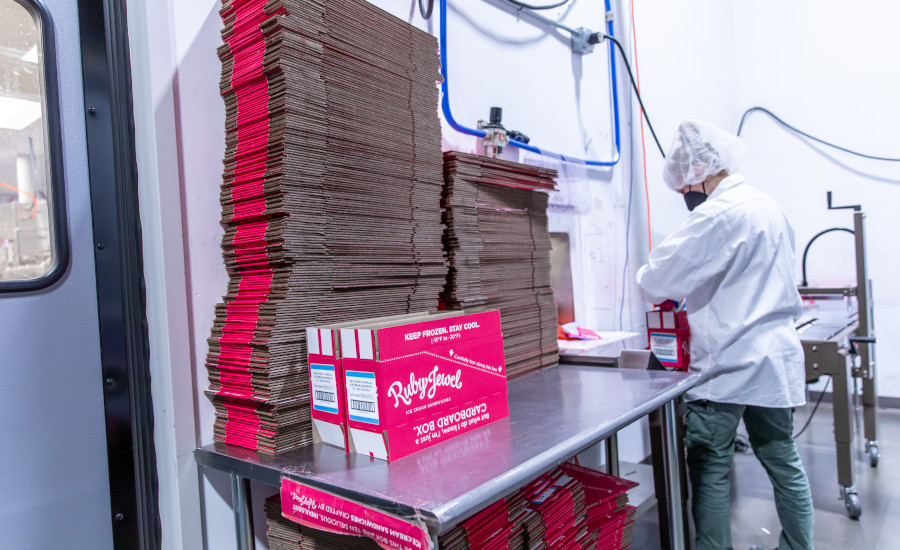 All about the team

Panos is clearly enthusiastic about the endless possibilities for the future of Ruby Jewel, especially in regard to its plant. But what excites him most is the chance to work with a team that truly cares about each other and shares the corporate vision of growth.

This is perhaps best exemplified in a delivery driver who worked with the company for several years. A few years ago, Panos came to work on a Saturday morning and found this driver on the floor of the warehouse with a pink thread and a sewing needle sewing a pink umbrella back together because he knew a catering customer wanted the umbrella over their ice cream cart he was going to deliver. All of this took place while the truck was warming up.

“While we don’t have a catering business anymore, this is just one example of how our team members go above and beyond. We see similar efforts every day with what our team members do to get that perfect ice cream sandwich out to the world,” Panos states. “I am touched by the commitment on a regular basis. That is one example of many.”

Panos concluded he is really proud of Ruby Jewel’s ability and desire to keep developing its team.

“Team members have constantly been promoted to increasing positons of responsibility,” Panos mentions. “The entirety of the management team in the operations department came up from hourly line positions. They are now teaching that next generation of employees.”