Ice cream sandwich processor continues to focus on what it does best.

Portland, Ore., also referred to as “The City of Roses,” “Rip City” and “Stumptown,” is known for many things, including beautiful parks, a plethora of beer microbreweries, and the NBA’s Portland Trailblazers, featuring its superstar guard, Damian Lillard. Its many famous residents include author Beverly Cleary, director Gus Van Sant, “The Simpsons” creator Matt Groening and Marvel Comics’ artist and writer Brian Michael Bendis.

Another thing Portland is increasingly becoming famous for: dairy processors. Among these is ice cream and frozen novelty processor Ruby Jewel, which has huge growth aspirations.

Like many brands, Ruby Jewel had humble beginnings. The company was founded in 2004 by Lisa Herlinger, a trained chef who was always keen on starting her own business. She spotted a trend of many super-premium cookies and ice creams appearing in the marketplace, however, Herlinger noticed none of these processors had combined the two to create a super-premium ice cream sandwich.

Herlinger crafted her original recipes in the kitchen of the restaurant where she worked, initially selling her ice cream sandwiches at Portland farmers’ markets.

“It was such a smash hit that she had lines wrapping around the farmers’ market,” Ruby Jewel CEO Eric Koppelman, who joined the company in October 2019, tells Dairy Foods. “People fell in love with it and it became a famous local product.”

Herlinger, who is still an owner of the business and sits on its board of directors, started off with a chocolate chip cookie filled with vanilla ice cream. That was a fan favorite, but she did not stop there. Herlinger created many other combinations, including a lemon cookie with a honey lavender ice cream, as well as an oatmeal chocolate chip cookie with butterscotch ice cream.

Branching out and in

Ruby Jewel’s business expansion dates back to 2010, when it moved beyond ice cream sandwiches and started making its own ice cream.

“It seemed like an obvious complementary business. It some ways it was,” Koppelman acknowledges. “At that point, we started making tub ice cream for sale in our own company-owned brick-and-mortar scoop shops. We then added ice cream pints that were also sold into retail locations.”

Ruby Jewel also expanded beyond traditional retail, branching into food trucks selling its products. Many people enjoyed the ice cream and wanted to sell it at their own locations, so Ruby Jewel also added truck deliveries to its business model.

“We named our factory Sandwich City to reinforce with our team that our No. 1 objective is to produce the best-quality, best-tasting ice cream sandwiches as efficiently and price-consciously as possible,” Koppelman asserts. “We sold all of our ice cream-making equipment to separate production lines. Today, from open to close, all we make are ice cream sandwiches and dedicate all of our resources there. Sandwich City is a constant reminder of our narrow focus.” - Eric Koppelman, CEO of Ruby Jewel

However, the business model changed in 2019 and 2020 when Ruby Jewel closed down segments of the business not focused on ice cream sandwiches. That’s when the name “Sandwich City” was revealed as a moniker for its plant.

Koppelman has served the food industry for 27 years, including positions at Velveeta, DiGiorno, Cracker Barrel, and Pork. The Other White Meat in advertising positions, as well as many natural and organic food brands including Oregon Chai (Tea), Tasty Bite (Indian Food), and Blue Dog Bakery (dog treats).

Hence, he has seen a lot in the food industry. Koppelman has set forth a main goal to grow Ruby Jewel into a national business with a four-channel business strategy: grocery, natural, convenience, and direct-store delivery (DSD).

“We’re looking to grow the business from a well-distributed regional brand in the Pacific Northwest into a national brand,” Koppelman asserts. “The wonderful thing about Ruby Jewel is that we’re an individually wrapped, single-serve ice cream sandwich. We make complete sense to be in grocery stores and natural foods stores for your weekly shopping trip, as well as convenience stores, on-premise foodservice, and hotel micro-markets.”

Ruby Jewel has already made significant progress on growing nationally. For instance, its products are available at Sprout’s Farmers Market locations, the second-largest natural foods supermarket in the United States, which operates double-digit locations in California, Texas, Arizona, Colorado, Florida, Georgia, Nevada, and Oklahoma, as well as five divisions of Whole Foods Market which is stocking its seasonal SKUs.

“Because we’re single-serve, we’re aggressively pursuing locations offering grab-and-go and immediate consumption,” Koppleman notes. “We have very good distribution in the Pacific Northwest with local convenience store chain Plaid Pantry. And at 7-Eleven, we’re starting in the west and moving that distribution across the country.”

Additionally, Ruby Jewel now is available at some college and university campuses, which offer immediate consumption in places like cafeterias, libraries, and sports’ concession stands.

Koppelman is also excited about the opportunity to expand nationally into corporate campuses of larger companies, as well as hotels that house micro markets or mini convenience stores at guest check-in, which often have frozen novelty freezers.

“And then, there is the channel of frozen DSD. Many companies are looking for a premium, better-for-you, incremental sale for their trucks,” Koppelman says. “We are pursuing those distributors across the country.” 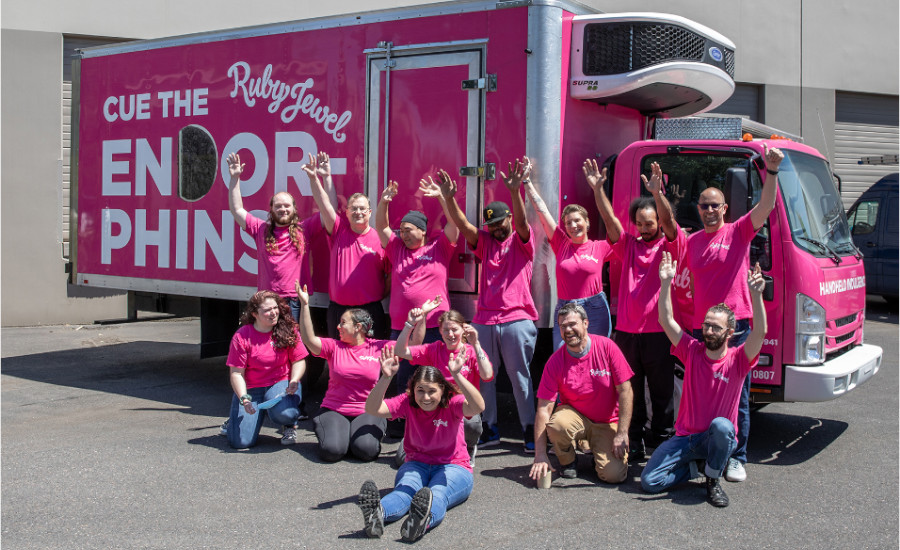 Beyond ice cream sandwiches, Ruby Jewel also focuses on environmental, social, and governance (ESG) concerns and has developed a detailed ESG proposition, which includes a goal to be carbon-neutral by 2035.

“ESG is an approach to managing our business and managing our impact that we take very seriously,” Koppelman relays. “We always work in support of our team members here and our local community in any way we can. We support minimizing our impact on our environment.”

This plan goes way beyond environmental impact, however. Ruby Jewel constantly thinks of its employees in many ways, including well-being notes, company lunches, and a suggestion box.

“We keep the team informed of our progress and initiatives regularly. We ask for the team’s input so we can make this a great place to work,” Ruby Jewel’s CEO reveals.

“We take the input from those surveys very seriously and try to act on the suggestions quickly,” Koppelman notes.

Diversity, equity, and inclusion is another main Ruby Jewel focus. The company’s workforce is diverse, including a majority of females on its board of directors.

“We track and calculate the diversity of our overall team member base top to bottom and we benchmark that against our local market,” Koppelman notes. “I can report we are female-dominant in our production team and have greater diversity than the Portland market overall. We are exceeding our goals on the diversity front.” 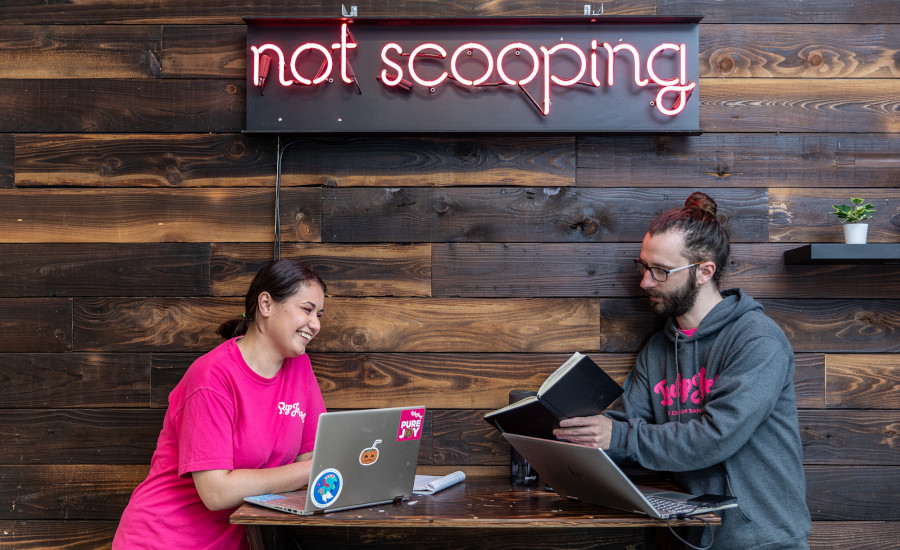 Ruby Jewel is also doing whatever it can to improve the quality of life and work-life balance of its production team. This includes offering higher wages and an enhanced benefits package.

“In the past two-plus years, we have increased our average hourly rate for our production team by more than 25%,” Ruby Jewel’s CEO says. “We’ve also added everything from 401K plans to FSA accounts, AD&D (accidental death and disability) and life insurance benefits. We have a generous paid-time-off policy and we make sure our team members can plan their family vacations and holiday needs throughout the year in a way they feel is appropriate.”

“One of the biggest assets we currently enjoy is that we are a small team of people who genuinely care about each other,” Steve Panos, Ruby Jewel director of operations, says. “Everyone has a matching desire to work in a safe workplace. That is shared by management up to the executive level.”

During the height of the pandemic, the workforce at Sandwich City was reduced, and workspaces were spread out throughout the production floor.

Reducing the manual process of processing ice cream sandwiches, which is labor intensive, reduces repetitive stress of the activity, as well as wear and tear for plant employees, Koppelman adds.

“Improving processes maintains the health and continuity of our staff,” he says. “We now have an indexing conveyor that runs underneath an automated depositer. We still do manually cap every ice cream sandwich. We have not solved that problem with robotics yet, but we hope to.”

New automated bagging equipment was installed at Sandwich City in late August to further reduce the stress on employees. Ruby Jewel’s SUP (stand-up-pouch) is pre-formed. One person manually drops a sandwich into an opened pouch and the equipment then heat seals and date coats the pouch and then continues on another conveyance, which carries it to master case- forming equipment, Koppelman explains.

“Finished product travels into another freezer along a conveyance with a spring-loaded pallet device. This system keeps the pallet waist-high, so [the team member] doesn’t need to bend over. That’s the magic of what Steve has created in our production facility,” he concludes.