Processors seeking to expand their facilities and technologies most efficiently must team with partners that have the necessary expertise and experience.

For many dairy processors, the need to spend millions of dollars to expand their facilities to support increasingly greater activity and/or launch new product lines is a good situation in which to be. Yet making the necessary plant renovations can be arduous. A project that results in the most effective operations requires processors to hire adept partners — including architects, engineers, and contractors — while dealing with such obstacles as workforce and supply shortages.

Initiatives, however, are moving forward. In 2021, for instance, Cacique LLC, a Monrovia, Calif.-based producer of Mexican-style cheese, cremas, and chorizo, broke ground on an $88 million dairy processing facility in Amarillo, Texas. Cacique reports that the new 200,000-square-foot facility will feature technologies that allow the company to increase its overall capacity and meet the growing demand for its products.

Also last year, Bongards Creameries, a Chanhassen, Minn.-based cheese manufacturer, announced plans to expand its Perham, Minn., plant, which includes the addition of a 70,000-square-foot refrigerated warehouse. The warehouse will hold the plant’s finished goods, including cheese blocks and barrels until they are ready for shipment to customers.

In addition, Seattle-based dairy cooperative Darigold Inc. is building a new premium protein and butter operation in Pasco, Wash., which will feature technologies and strategies for reducing greenhouse gas emissions. When operational, the strategies will cut per-unit emissions by 25% compared to its existing baseline, the organization reports.

Is it financially workable?

Before embarking on an expansion, however, dairy processors must ensure they have a solid business case, says Scott Hodel, director of process engineering/capital project management for Cincinnati-based Hixson Architecture & Engineering.

“The business case needs to be feasible in terms of budget and timeframe,” he states. “In today’s world, with supply chain issues and a tight labor market, projects aren’t going to happen overnight.”

As part of an acceptable return on investment, processors also need to calculate the capital necessary for automation. That includes determining if they can save money by integrating newer technologies with their current equipment, says Jason Burks, inside sales manager for Dejong Consulting LLC, an Edgar, Wis.-based operations, management, and consulting firm.

“Making old machines talk effectively with new machines often requires writing custom code, which in turn can be challenging to decipher for anyone who comes in after the fact,” he states. “A large part of this process is digging in to review the current status to determine if it's better to start fresh or continue patching.”

In addition, some modern technologies may have capabilities that an older system cannot utilize, making it difficult to “upgrade” equipment, Burks says. Even integrating computer systems that meet the new operating demands can be tricky.

“With new builds, the requirement for modern equipment and internal computer-based communication often creates a strain on existing, and typically outdated, programmable logic controllers and wiring,” Burks states. “Expansion may require retrofitting and reprogramming old equipment to interface with the new devices, which can be daunting.”

Processors seeking to expand their facilities and equipment, meanwhile, should expect a “reasonable amount of time” for project completion, Burks states, noting that it often takes 30 to 40 weeks for companies to receive equipment after placing an order.

“Supply chain problems and price volatility are the biggest challenges to capital expansion projects,” adds Steve Guericke, senior process engineer at Dennis Group, a Springfield, Mass.-based designer and builder of food processing facilities. “We’re seeing lead times on materials and equipment that are four to five times longer than they would have been a year or two ago. Compounding the problem are price surges and cost fluctuations so unpredictable that some subcontractor bids are only good for 24 hours.”

“It’s challenging when a team unearths unknown pitfalls during the design process which result in additional costs that weren’t in the budget,” he says.

“In the current environment, comparing a timeline and budget from a comparable project executed several years ago is meaningless,” he says. “Ensuring that you are allocating sufficient contingency in both schedule and budget can help buffer against the inevitable surprises that will occur during procurement and execution.”

The most efficient expansions, meanwhile, occur in facilities that processors built with future development in mind, Tucker notes, stating that such planning can reduce costs while helping to streamline construction. Contractors, for instance, can often more easily extend the workspace in such plants by just opening a wall, he says, adding that “without a plan, sections of the facility can get boxed in.” 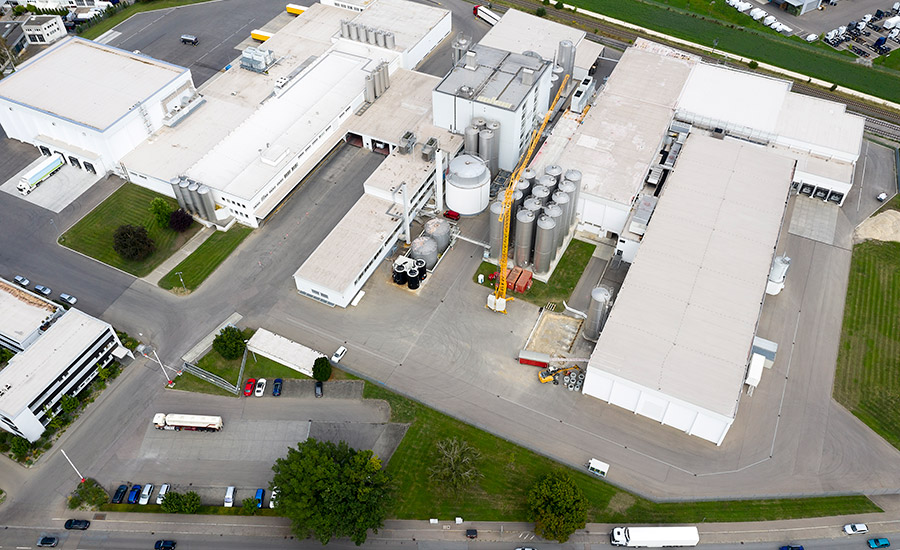 Photo courtesy of Bim via gettyimages.com

In some instances, it might be more practical to construct a new facility instead of expanding existing operations, says Kyle Kartchner, Dennis Group senior partner.

“Developing an existing facility may appear to be the fastest and most economical way to increase capacity, but processors should perform due diligence to confirm that expansion is the most viable option,” he states. “Manufacturers can assess if the current site supports expansion based upon immutable factors such as the permitting environment, available labor force, existing utility infrastructure, local municipality capabilities and availability of raw milk and other ingredients. Sometimes a new facility rather than an expansion will align better with business objectives.”

Auditing current operations also can help processors determine if expansion is even necessary, Burks says. “Production efficiency studies may identify the improvements processors need to make to meet increased demand without an expansion,” he states, which can include analysis of equipment, automation and packaging, while a clean-in-place technology audit will identify cleaning parameters and potential weaknesses.

“New build versus expansion will always be a balancing act,” he continues. “Processors need a partner who understands their motivations and goals to clearly outline the risks and benefits of both options so they can make an informed decision that has the best chance of an ideal outcome.”

Tucker adds that such decisions also “will be a balancing point of what the building, land and city can handle,” with lot size and local regulations on water usage and waste among the variables for consideration.

It is important as well for processors to involve their associates in the discussion of whether to build a new facility or expand the current plant, Burks says, “given that the partners should be experts” in the necessary equipment and regulations, and “capable advisors of both cost and lead times.”

Be thorough in searching for partners

To pinpoint the optimal partners, processors should follow a vetting process that identifies firms that can assist with architectural design, engineering, automation, construction or other areas of need, Guericke says, adding that “a good partner will act as an extension of your internal team. At the onset of an expansion project, involve a wide range of stakeholders outside of engineering such as operations, QA, R&D, safety, and sanitation.”

Operators also should first determine the range of services they will need before creating a request for proposal, Hodel states. The most attractive candidates will have the resources to manage the wide array of design and construction elements and experience in supporting dairy industry projects, Tucker says.

“Designing a facility expansion that meets both short-term and long-term needs requires a holistic view,” he states.

In addition, it is crucial that processors visit the top two or three candidates, Hodel says, noting that operators will get a much better sense of a firm and its people and how they collaborate with each other.

“Ideally, you are building long-term [partnerships] versus creating transactional relationships,” he states. “These partners may end up knowing your business as well as, or better than, some of your own team members.”

Gauging potential partners’ understanding of dairy industry trends and regulations, and the hidden pitfalls that could occur during expansion, is essential as well, Burks states.

“When vetting designers and builders, consider their core competencies, breadth and depth of internal resources, experience with similar projects, ability and willingness to customize solutions, and contractual arrangements they are willing to work under,” Kartchner says. “Common project pitfalls arise from a lack of comprehensive due diligence on the front end. Loosely defined scope prior to a hard bid can result in cost escalation via change orders and scope creep.”

Engaging a partner to assist with better defining the scope, schedule, budget and potential risks in the early planning stages can be an effective way to trial their capabilities before moving into execution, he states.

The most appropriate partners, Burks adds, also will have the resources to train dairy plant workers on the innovative technologies or operating procedures that result from expansion.

“It makes no sense to invest heavily in a new expansion and then people it with uneducated operators,” he notes. “Training should cover normal operations, troubleshooting, and maintenance so that there is an effective operation and viable production from day one.”

In addition, astute partners can protect processors from many project uncertainties by predicting market shifts, which will enable operators to plan accordingly in the budgeting and planning phases of project exploration, Burks notes.

“The backbone of an efficient expansion is comprehensive due diligence,” Guericke adds. “It starts with a thorough understanding of the current state of the facility and its ability to support expansion. Multiple design scenarios are evaluated at a high level, and risks and impacts to ongoing operations are analyzed.”

It also is crucial to consider current business needs and future expandability when making decisions, he states.

“The result is a better-defined scope, milestone schedule, and budgetary estimate for the project, which serves as a roadmap for how to bridge the current state with the business objectives,” Guericke notes.

A different take on dairy flavors

Dairy deals with a transportation slowdown

How to sidestep the allergen minefield in dairy processing

Pump up dairy production with the right pumps and valves

Does your dairy plant have labor pains?

How to solve the dairy packaging puzzle

How to sidestep the allergen minefield in dairy processing

How to outfit an on-site dairy lab