Milk is more than a collection of components; thus, it cannot easily be recreated in a lab.

By John A. Lucey
✕

Some startup companies have claimed that they can commercially and sustainably produce an animal-free “milk.” As a dairy chemist, I have to caution that unless we reimagine milk as a simple mixture of a couple of basic components with added color, these claims are not likely to be realized anytime soon.

Various terminologies are being used to describe these “novel” processes. One popular term is precision fermentation, which is the same as microbial fermentation used more than 30 years ago to produce recombinant calf rennet. To make rennet via microbial fermentation, the gene from the calf was inserted into an industrial strain (yeast or bacteria) that was then grown in a fermenter. The rennet protein was then isolated and purified.

It is not surprising that startup companies could apply this same technology to make a single milk protein; recently, one whey protein was produced by this approach. Simple functional proteins with sufficient value have been commercially made by this approach for decades by enzyme and dairy industries. But the question is, can this approach be used to duplicate milk?

The challenges to recreating milk are tremendous. For starters, caseins in milk are found as casein micelles, which are large, complex aggregates of four casein proteins. So, four fermentation systems would be needed to produce all these caseins.

Although microbes could produce the caseins via fermentation, those microbes are unable to replicate the tremendously complex process that caseins undergo in the mammary cells of cows. We call these processes post-translational modifications.

Caseins get their functionality — such as their ability to bind calcium or to be destabilized by rennet in cheesemaking — through a series of complex processes in the mammary cells. This is where various specialized enzymes — working in concert with salts such as calcium and phosphates, as well as complex sugars — modify the caseins. Not all the enzymes involved are known — or commercially available.

Reaction conditions and rates/concentrations for the addition of components to protein structures are carefully controlled to avoid protein precipitation. The end result of these complex biochemical processes is the assembly of caseins into beautiful, naturally produced biostructures called casein micelles.

Other food for thought 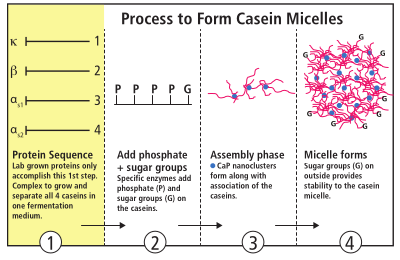 Some companies are claiming that they can make cheese from animal-free “dairy” proteins. I would be wary of these claims because without creating casein micelles, we are unable to use rennet to coagulate milk, which is the traditional method for making natural cheese. Instead, much like how plant-based “cheeses” are currently being made, various ingredients could be mixed together to form gelled products that are being described as “cheese.”

Another question we should ask is whether a microbial fermentation process could someday produce milk cheaper than cows (if all the biosynthesis challenges could be overcome). This claim seems very doubtful. The cow’s digestive system includes complex microbial fermentation (in the rumen), a process that takes inedible feeds such as grass and uses those fermentation end products to make nutritious milk components within the mammary cells. It’s hard to imagine how we could cost-effectively improve upon a cow in producing milk; the cow, by simply eating grass, can produce 8 gallons or more of milk every day.

Industrial fermentation requires feedstocks and other inputs that could also be used as human food. It needs significant genetic engineering and processing to produce a couple of components, which lack the diversity and complexity found in a natural biological material such as milk.

Another potential technology to produce cow’s milk could be cell culture. Cells, in this case, would be mammary cells extracted from the udder of cows. These cells would contain all the complex enzymes/processes required to modify and assemble the milk components that were lacking in microbial fermentation. However, growing cells in bioreactors is very complex and extremely expensive. This process would not be animal-free, as animal cells would be making the milk — but now in the lab, not in the cow.

In conclusion, although there is a lot of interest and publicity, it’s not obvious to me that there is a cost-effective, sustainable method to produce animal-free “milk” that still contains the natural complex structures such as casein micelles and fat globules, functions like real milk for dairy processing operations, or contains the diverse nutritional components. We can’t easily improve upon millions of years of evolution.

John A. Lucey is a professor of food science at the University of Wisconsin, Madison, and the director of the Center for Dairy Research.