Exports of Manchego cheese to the U.S. have doubled in last 5 years

American consumers seem to really appreciate the unique qualities they find in cheese from Spain's Manchego designation of origin. For the last five years, exports of Manchego cheese to the United States have doubled, with excellent future prospects for this market. 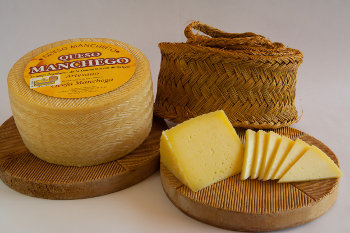 The figures for 2012 reveal that of the almost 13 million pounds exported, over 6 million pounds were destined for the U.S. market, representing almost half of the region's total exports.

As confirmed by the president of the Designation of Origin, Ignacio Barco Camarena, exports of Manchego cheese are expected to account for more than 75% of its total production in the next four years. The United States is one of its most appreciative and growing markets, being the main destination for exports of D.O. Manchego cheese.

At present, annual production of Manchego cheese is in excess of 26,500,000 pounds. This has grown by 20% in the last five years and is fed by 800 sheep farmers in the La Mancha region of Spain to produce one of its most highly acclaimed foodstuffs.

A cheese that reflects its origins
This scenic region that encompasses the provinces of Albacete, Ciudad Real, Cuenca and Toledo is the habitat of the Manchega sheep, a breed that has been kept pure in order to maintain the unique properties and characteristics of its milk. Their forage, which is determined by the region's climate, is a key factor in the quality of the milk, the raw material of Manchego cheese.

Genuine quality
The manufacturing process of the cheese follows a strict process which lays down the internal and external characteristics that all Manchego cheeses must meet. The product is easy to identify if you remember the following features, which are common to all true D.O. Manchego cheeses:

Distinguishing features:
As well as the serial-numbered casein tab on one side of the cheese, there should be a back-label on top of the cheese's commercial label.
The Regulating Council is the body responsible for certifying that the cheese fulfils all the requirements established by the specifications to guarantee to consumers that they are purchasing a genuine Manchego cheese.