This website requires certain cookies to work and uses other cookies to help you have the best experience. By visiting this website, certain cookies have already been set, which you may delete and block. By closing this message or continuing to use our site, you agree to the use of cookies. Visit our updated privacy and cookie policy to learn more.
Home » Yogurt wars: Can anything compete with Greek?
Dairy Foods & BeveragesCultured DairyInternational Dairy ProductsNew Dairy Products
Yogurt

Yogurt wars: Can anything compete with Greek?

International-style yogurts are increasing and giving Greek yogurt a run for its money.

In the beginning, there was yogurt. And it was good. Then came Greek yogurt, and the people declared it was even better. After the Greeks got their foot in the door in the United States, other international-style yogurts followed. Thus, U.S. shoppers are finding Vietnamese, Australian, Bulgarian and Icelandic cultured dairy foods in their supermarkets. 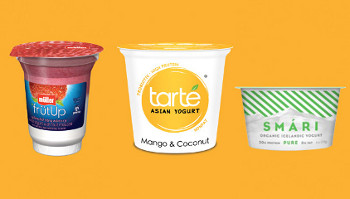 International-style yogurt products continue to show up on the market, each one emphasizing its unique qualities that make a great “alternative” to Greek yogurt; whether its protein content, texture, low sugar or unique flavors. But can any of these new yogurts really compete with the popularity of Greek yogurt?

But Greek yogurt is no longer the only yogurt on the market that can make these claims. Many other international yogurts are coming up with comparable options, some with all these qualities, some with just a few. Protein is an especially big selling point for Greek yogurt and many processors are answering the call for high protein.

One recent addition to the market making the protein claim is Tarté Asian Yogurt, produced by Tarte Foods LLC, Santa Monica, Calif. This Vietnamese-style yogurt has a lighter texture and less sweet taste compared to most flavored yogurts, yet it still has a high protein content (approximately 13 to 14 grams of protein per 6-ounce serving).

It’s available in unique flavors like Green Tea & Honey and Mango & Coconut. According to Winston Lee, founder of Tarté Asian Yogurt, Vietnamese-style yogurt is made with the sugar and milk cooked and caramelized together before culturing; creating lightly sweet cooked milk flavor very similar to the way you would make Dulce de Leche. The result is a style traditionally less sweet tasting with no additional fruit added, with a light, creamy texture similar to a French-style yogurt.

Another with the protein emphasis is Smari Organics, Petaluma, Calif., it created Smari, a grass-fed, organic Icelandic yogurt that boasts a whopping 17 to 20 grams of protein per 6-ounce serving.

Yogurt without borders
A consumer can find yogurt from all over the globe these days. There are Trimona’s Bulgarian yogurt, an unstrained, organic grass-fed milk yogurt that's low in sugar; MüllerQuaker Dairy’s European-style Müller Corner and Müller FrütUp yogurts; and Noosa Finest Yoghurt’s Aussie-style yogurt, with exotic flavors like Passion Fruit.

Positioning yogurt as a dessert, like Tillamook County Creamery has done with its dessert yogurt, is driving flavor far beyond the traditional strawberry, blueberry, raspberry and lemon. Processors are pushing the envelope with unique and exotic flavors, whether it’s Noosa’s Passion Fruit or Tarté Asian Yogurt’s Strawberry & Guanabana.

International-style yogurt companies aren't the only ones trying to compete with the Greek yogurt market. Conventional yogurt processors are doing what they can to keep up, whether it's with new packaging, creating unique flavors or special blends, or simply getting a Greek option into its lineup.

Take Tillamook which recently added a Farmstyle Greek yogurt to its line. It's strained and has the high protein of Greek yogurt (14 grams of protein per 5.3-ounce serving), but the milk is also slow churned and the yogurt is made with buttermilk cultures.

Yogurt giants Dannon and Yoplait each added new Greek options to its line ups last year, Dannon with its Activia Greek and Yoplait with its new blended Greek yogurt, with flavors like coconut and pineapple.

The gist of it all, even though Greek yogurt dominates the conversation, it ultimately has helped the yogurt category as a whole. And a case can be made that it's the reason a door has been opened for these new international-style products to make their way to the market.

"Greek yogurt proved that there was a premium in the marketplace that people were willing to pay for a high-quality yogurt," Lee said. "Prior to Greek, the yogurt category was commoditized with no difference between a store brand yogurt and major brands like Dannon and Yoplait. They were all $0.50 a cup and people bought what was on sale. Then Greek comes out at $1.79-$2.00 and the entire category changed because of the value proposition that they offered; higher protein, natural ingredients, no fillers and starches etc."

That gave Lee confidence to try and introduce new international styles and actually compete with the major CPG companies, he said.

"The Greek yogurt pricing war that is happening right now is starting to make the Greek yogurt sub-category look somewhat commoditized with what seems like a 10/$10 deal every day and that’s why I think you’re starting to see more international styles. They’re new, unique and different from Greek. You now have, Australian, Icelandic, German Style Quark and now Vietnamese."

The question still remains as to whether any of these other yogurt companies will be able to grab a larger share and compete with the Greek yogurt market. Some are certainly making a good run for it. Let the yogurt wars continue.