This website requires certain cookies to work and uses other cookies to help you have the best experience. By visiting this website, certain cookies have already been set, which you may delete and block. By closing this message or continuing to use our site, you agree to the use of cookies. Visit our updated privacy and cookie policy to learn more.
Home » Brian Perry of Perry's Ice Cream is honored for his service to the industry
Dairy Processor News
Award-winning dairy processors

At the award ceremony at the Dairy Forum, Perry called his father (a previous recipient) to the stage. 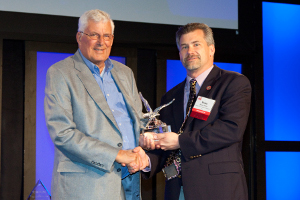 The International Dairy Foods Association presented the 2013 Soaring Eagle Award to Brian Perry, executive vice president/vice chairman of Perry's Ice Cream Company, Inc., in Akron, N.Y. He received the award at a special ceremony during IDFA’s 2013 Dairy Forum at the JW Marriott Orlando Grande Lakes in Orlando, Fla. [Editor's note: Perry called to the stage his father (on the left in the photo), a previous recipient of the award. Tom Perry, at the time of  his induction ceremony, was unable to attend.]

The Soaring Eagle award recognizes the extraordinary service of leaders in the dairy industry and those who have provided exemplary leadership to IDFA, the International Ice Cream Association, the Milk Industry Foundation and the National Cheese Institute.

During Brian's tenure as an officer, IDFA was successfully engaged in efforts affecting the dairy portion of the Farm Bill and national nutrition issues.

"Brian certainly knows the industry well. He knows the players, knows the important issues in the industry," said Jon Davis, president and CEO of Davisco Foods International, Inc., and IDFA vice chairman. "He brings an enthusiasm and an energy to the exchange of ideas among everybody at the board level."

While serving the industry organizations, Perry continued to focus on the growth of his company and the ice cream industry overall.

"Perry's under Brian's leadership has been terrific on innovation," said Connie Tipton, IDFA president and CEO. "For the last several years, they have won, year after year, the top ice cream flavors at our Ice Cream Technology Conference."

Commending Perry on his leadership, Tipton said, "Brian, thanks for all you've done for this industry and congratulations on this well-deserved honor."

A video honoring Perry is available on IDFA's YouTube channel.

Perry’s Ice Cream has the 2019 Plant of the Year