Nontraditional “milks” and mixed blends climb the ladder of success, with plant-based milk segment claiming 10% of volume of all fluid milk sales.

The healthy hydrating refreshment of nutrient-rich milk will never go out of style. Yet, refrigerated and shelf-stable plant-based dairy alternatives like oat milks, almond milks, and pea milks are trending upward, albeit from a far smaller base than animal-based milks. In fact, as of June 16, 2021, animal-based milks were up 5.6% and had a total revenue of $13.9 billion, while plant-based milks were up 4.9% with a total revenue of $2.6 billion, Dan Buckstaff, chief marketing officer for Chicago-based SPINS, reports.

Yet, the typical plant-based milks residing in the refrigerated section, including almond, coconut, rice, and soy, all experienced declining sales, while dairy alternatives such as oat milks and pea milks, as well as mixed blends are climbing the ladder and increasing in popularity, Buckstaff states.

“Oat milk grew by 48.2% with $479 million in revenue and pea milk grew 26.3% with $58 million in revenue,” he explains. “We are seeing similar numbers and trends in the shelf-stable category of plant-based milks as well, with most of the growing products being nontraditional blends.”

With an expanding array of plant-based milks currently on the market, old standbys such as almond, coconut, and soy milk could be experiencing a decline as plant-based, and often non-plant-based shoppers, experiment with newer products to replace the older varieties, Buckstaff relays.

Oat is still a long way behind almond at $1.29 billion and down 2.6% year-over-year, he continues.

“Coconut has been around for a long time but is only $68 million and is down 11.4%. Oat has been stealing share from all other types of PB milk. The only two other growing types are pea at $47 million and 32.2% growth and banana with $4 million in sales, up 110.4%, Crawford states. 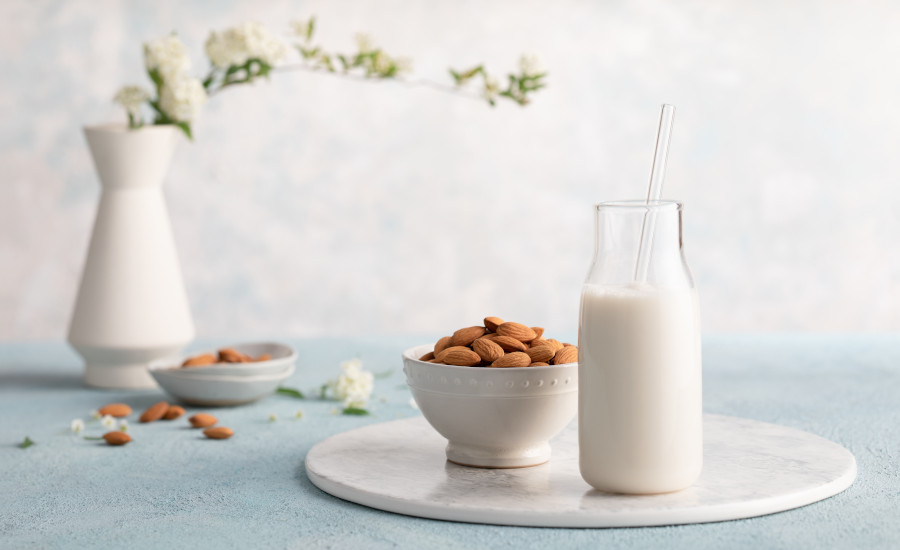 Due to its global appeal and acceptance, almond milks are No. 1 in the alternative dairy space, holding 77% share of volume in 2021. Photo courtesy of the Almond Board of California.

According to Crawford, oat milk first came on the scene at Starbucks, where this subcategory performs similar to traditional dairy, has a better mouthfeel than other plant-based milks, and works well in coffee.

“Oat milk has been on a tear lately. It’s currently the third most popular botanical used in plant-based milk alternatives, and its growth trajectory suggests it will overtake soy for the second slot next year,” he says. “It’s not just the milk alternative space; our customers are also asking for help formulating oat-based yogurts and ice creams. It seems there is something quintessentially wholesome about oats.”

In contrast, soy milk has been in decline for a while.

“A 2021 Datassential Consumer Survey showed almond milk is far more popular among U.S. consumers than any other plant-based milks, with at least three times as many weekly users as oat, soy, cashew, and pea milk,” says Charice Grace, manager of trade marketing and stewardship for the Almond Board of California.

The Modesto, Calif.-based association notes that the “global appeal and acceptance,” as well of the smooth texture, neutral taste, and versatility of almond milk, led to its double-digit growth between 2017-2021 in the Middle East, Africa, Asia, and Australasia (Australia, New Zealand and some neighboring islands in the Pacific Ocean).

Grace explains that almond milk’s nutritional benefits and mass appeal makes it a key ingredient beyond standalone beverage applications for its ability to complement a variety of flavors and alternative dairy products such as yogurt, cheese, creamers, and frozen desserts.

The Datassential Consumer Survey also found that almond milk’s appeal to consumers following plant-based, vegan, dairy-free, sustainable, keto, and gluten-free diets is unlikely to wane. Flexitarians also are increasing their consumption of plant-based beverages/foods to further their personal lifestyle and the health of the planet.

“Almond milk production can fit a zero-waste approach since the complete raw ingredient can either be used to make plant-based milk or upcycled into other products like granola or flour,” Grace adds.

Citing Chicago-based Mintel’s April report titled “The Future of Dairy and Non-Dairy Drinks,” Renee Beall, director of marking, food and beverage at New Hampton, N.Y.-based Balchem, explains that the flexitarian lifestyle has influenced the nondairy category, with 45% of nondairy drink launches claiming to be “plant-based” in 2021, a 10% increase versus the prior year.

“Dairy alternative drinks account for 11% of dairy category product launches, up 4% from 2019. Spoonable non-dairy yogurt has realized growth since 2018, with a positive CAGR [compound annual growth rate] of 5.2% over the five-year period,” Beall says, citing Arnhem, The Netherlands-based Innova’s June report on “Spoonable Non-Dairy Yogurt, US and Canada.”

More than three-fourths of dairy alternatives are positioned for vegans, while nearly a third are claiming to be plant-based, Beall says.

“We are seeing an urge in interest for our oat-based powders to create plant-based lattes, and as the base in functional nutritional powders along with other proteins like pea,” Beall says.

Post-pandemic, consumer attitudes, and beliefs are markedly changing. The Top 2 reasons consumers are switching to plant-based diets are “it’s healthier,” and “it’s better for the planet,” she adds, citing Innova Market Insights 2022 report, “A Healthier Way to Indulge.” 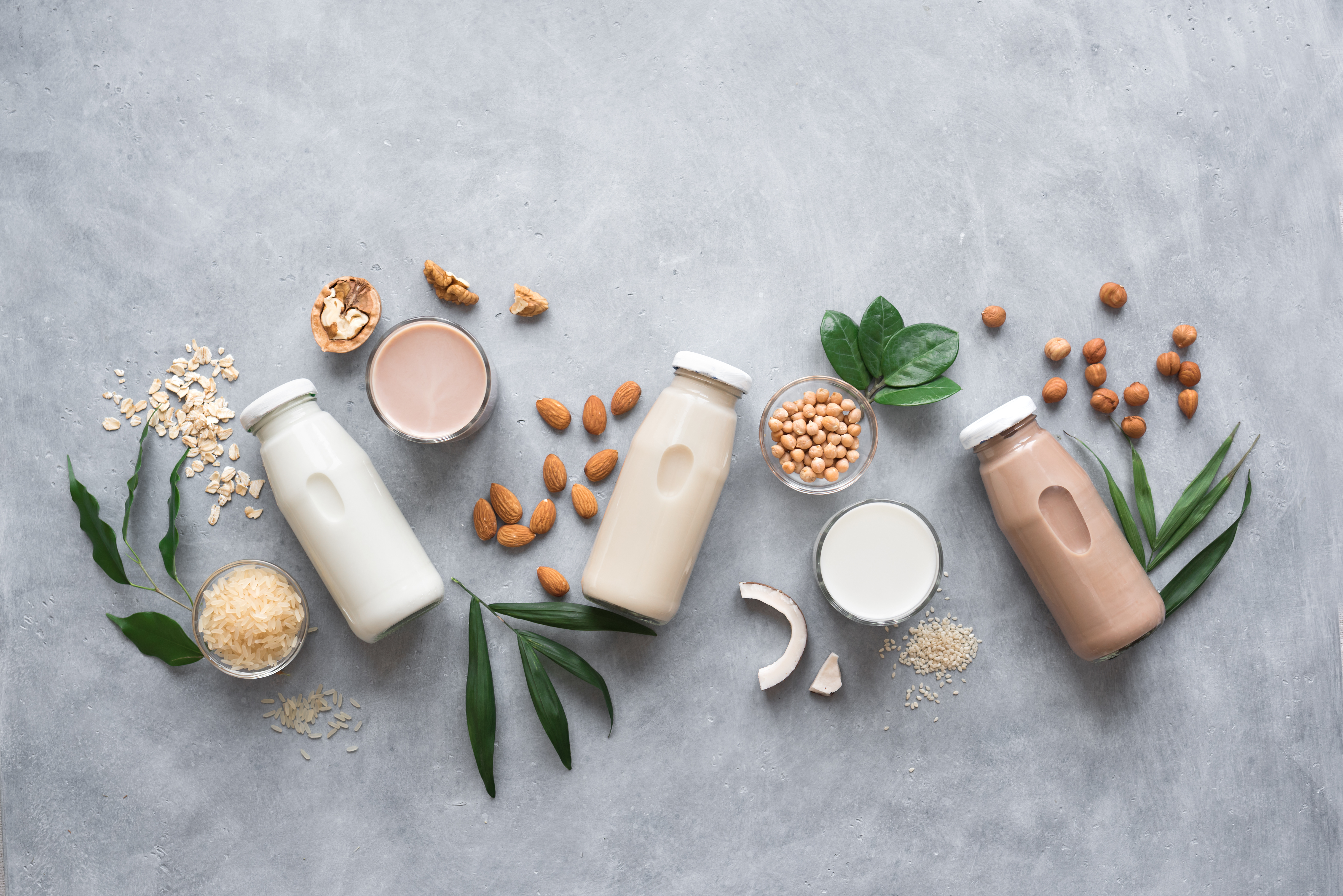 While the plant-based milk category is dominated by allergen-containing soy and wheat-based products, nutrient-rich pea proteins — with their nutritional and functional benefits — make them a preferred choice for plant-based dairy new product development, O’Neill states.

“Formulating with alternative plant protein sources, like pea, can be the next big thing in alternative dairy,” O’Neill explains. “… Pea proteins have low anti-nutritional factors and low allergenicity compared to soy and wheat, making them one of the most tolerated and accepted protein sources. Functional benefits of pea proteins include high solubility, clean taste, and an excellent mouthfeel.”

Fahlin points out that the plant-based milk segment continues to grow, with roughly 10% penetration on a volume basis of all fluid milk sales (conventional and plant-based).

Alongside oat milk, protein fortification is a key trend within the dairy industry. Christine Addington, Cargill’s senior technical service representative, suggests that more and more brands are “racing to close the protein gap” between plant-based options and conventional milk.

“Conventional milk have 8 grams of protein, ultrafiltered milk have around 13-14 grams and the super ultrafiltered products deliver around 20 grams,” she explains. “Juxtapose those numbers against the single gram of protein found in many of the current plant-based milk alternatives and it’s easy to see why protein fortification is a priority.”

That being said, suppliers are making inroads on pea protein solubility.

“Improved botanical proteins, like the work our partner PURIS has done to boost the solubility of its pea proteins, will be central to this new wave of innovation,” Addington reveals. “These advances are paving the way for the next iteration of plant-based products to cross the 10-gram threshold and deliver double-digit protein levels.”

As consumers seek more functional health benefits like improving one’s immune support and gut health, products that can fulfill this need state will grow within regular dairy and alternative dairy, according to Addington.

“The fastest growing categories for PB are cream cheese 1.9% share and 32.5% growth, cream/creamers are up 30% and yogurt is up 10.6%,” Crawford says, noting that PB is declining in two refrigerated categories: whipped toppings, down 2.4% and desserts, down 28.2%.

The brands seeing success in the plant-based space are making their mark across multiple Dairy15 categories. These include Silk, Almond Breeze, So Delicious, Plant Oat, Califia, and Oatly. Yet, Crawford asserts that only a few dairy brands have been successful in PB: Chobani, Ben & Jerry’s, and Coffee Mate, Natural Bliss sub-branded.

“It is much easier and more effective to take a PB brand into new categories instead of trying to bring a dairy brand into PB,” Crawford states. “The same top PB brands in the Dairy15 are the top ones in milk with Silk, Almond Breeze, Planet Oat, Califia, Oatly, and Chobani Oat leading the way. Silk and Almond Breeze have a combined 56.5 share of total PB milk.” 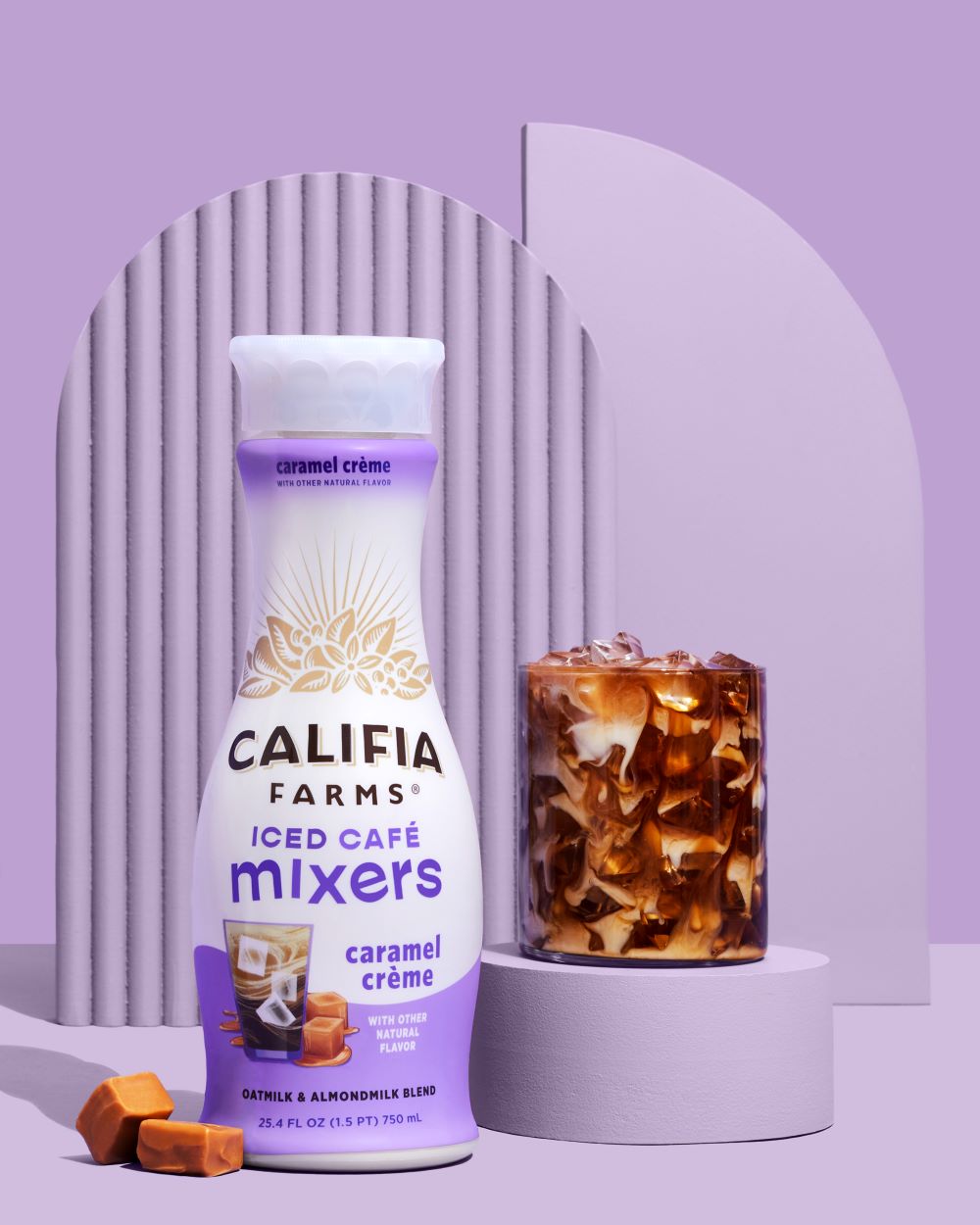 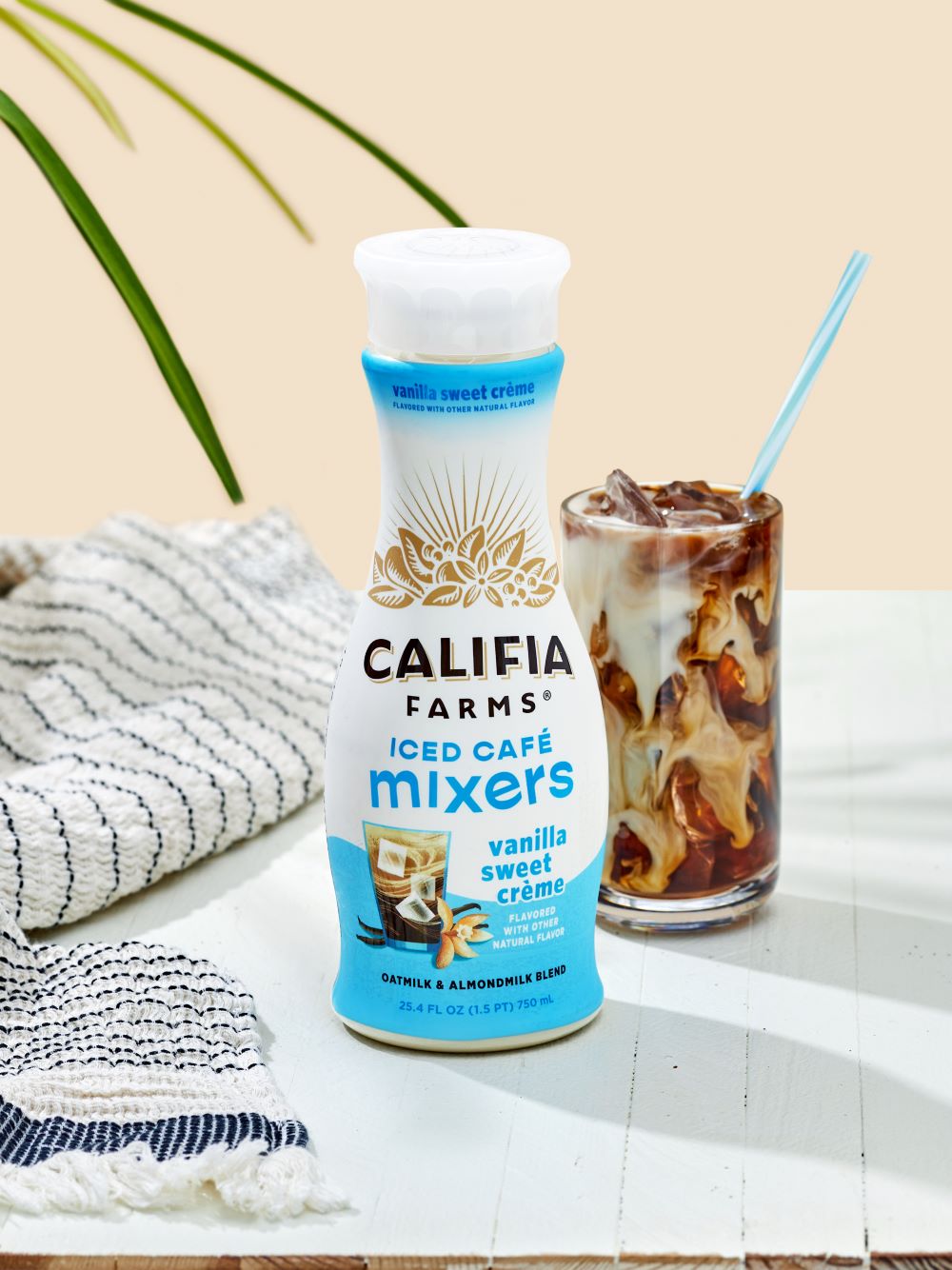 According to a SPINS’ report, alternative dairy creamers grew 33% in 2021.

A&B Ingredients’ O’Neill notes that plant-based creamers, butter, yogurt, and ice cream products are on an upward trajectory, albeit from a significantly lower based than traditional dairy.

“Manufacturers have significantly improved the taste and texture of plant-based dairy products that now can appeal to a broader consumer base,” he says. “As a result, more than 60% of households now purchase plant-based foods on a regular basis.”

“A fourth wave of innovation”

Cargill’s Addington notes that “a fourth wave of innovation” in the plant-based, protein-fortified beverage space “has been one of the most dynamic categories for the last decade, growing from a small niche into a market segment with true mainstream appeal.”

Citing Innova, Balchem’s Beall points out that while 29% of consumers say they wish there were more plant-based milk options in the grocery store, only four in 10 say they are satisfied with the taste of plant-based milk.

“This presents an opportunity for companies who make flavor systems, such as Balchem,” she says. “Our INjoy Flavor Systems allow simple, delicious ways to add flavor, a theme or limited time offer with on-trend flavor creations. They provide easy addition for manufacturers.”

She concludes: “Together, these forces are kick-starting a fourth wave of innovation, which promises to dramatically boost both protein levels and consumer appeal for plant-based, protein-fortified dairy alternatives.”