Back in 1905, John Widmer left his native Switzerland for the land of opportunity. He already had a job lined up at a cheesemaking plant in Dodge County, Wis.

John Widmer ultimately apprenticed at a number of cheese factories in the area, but his claim to fame is his founding, in 1922, of Widmer’s Cheese Cellars in Theresa, Wis.

One hundred years later, third- and fourth-generation Widmer family members are still producing delicious artisan cheese at this facility — using the traditional recipes and time-honored methods passed on by John Widmer and his three sons (see the Inside the Plant feature). The facility is a bit bigger these days, of course, with attached headquarters offices, expanded production areas, and even a cheese retail shop that gives visitors an up-close view of cheesemaking operations.

Third-generation family member Joe Widmer now is president and owner of Widmer’s Cheese Cellars. He is also a Wisconsin Master Cheesemaker, having undergone an advanced and grueling education program — twice. (The program, for experienced cheesemakers, is run by the Center for Dairy Research, University of Wisconsin-Extension, and the Dairy Farmers of Wisconsin.) Joe Widmer earned certifications for two Wisconsin originals — brick and colby cheeses — and cheddar.

“It provides a symbol of excellence for any consumer who is looking for a quality cheese,” he adds. “It also helps when training new apprenticeship cheesemakers to educate them on the little details during the cheesemaking process that affect the overall quality of the product.”

Joe Widmer’s son, Joey Widmer, has been with the company full time since 2014, after graduating from college, and is now vice president of operations. But Joe Widmer says his son actually started with the company years before that — performing odd jobs at the plant as a preteen and gaining exposure to cheesemaking operations at a young age. 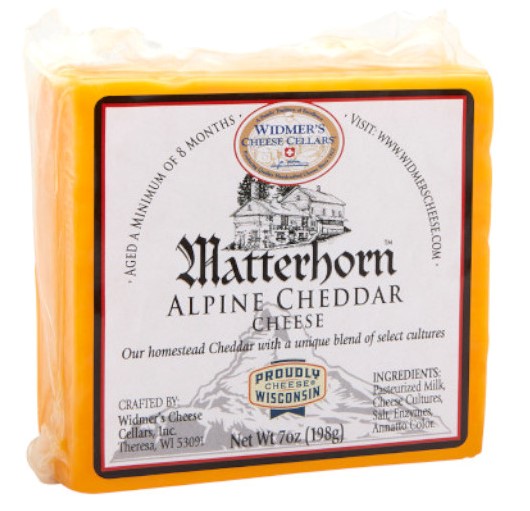 Those cheeses have won dozens of awards over the years in a variety of competitions. The company’s Aged brick spread, for example, was named Best of Class in the 2017 United States Championship Cheese Contest, while its Aged brick cheese took 1st place in the 2019 American Cheese Society Competition.

The company’s most popular cheese is its mild brick, Joey Widmer notes. 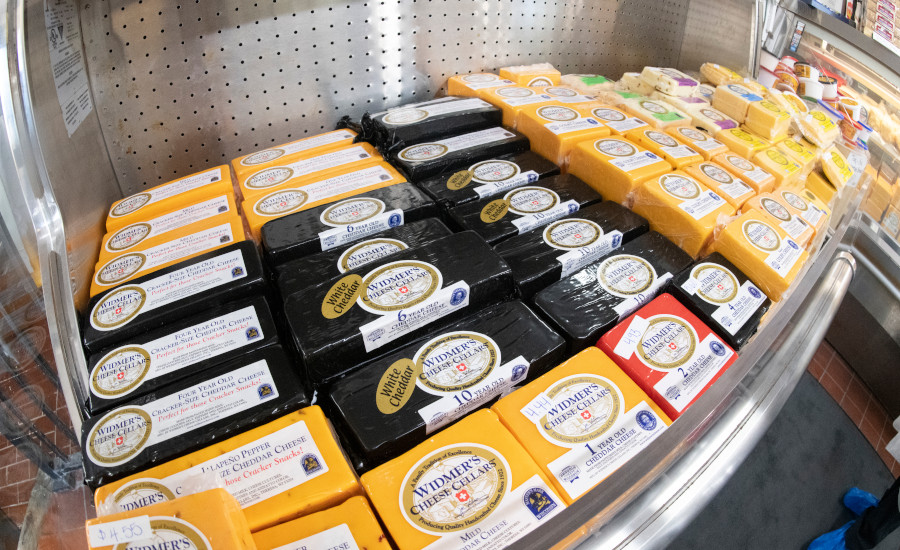 Widmer’s Cheese Cellars operates a retail store that’s attached to its cheesemaking facility. The store sells the company’s own cheeses, as well as cheeses made by some other Wisconsin cheesemakers. Photo credit: Photo by Vito Palmisano

“We are currently the only cheese factory that makes brick cheese using actual bricks to press the cheese,” Joe Widmer adds, noting that they are the same bricks that his grandfather used 100 years ago.

And Widmer Cheese Cellars’ newest offering is the Matterhorn Alpine cheddar. According to Joe Widmer, it is made using a blend of select Alpine cultures and is aged a minimum of eight months.

The process that was used to develop that cheese reflects the company’s typical approach to new product development — lots of trial and error, as well as experimentation. As Joe Widmer points out, the company doesn’t really rely on a formal written process.

“In the most recent development of our Matterhorn Alpine cheddar, we started by working with a culture company to determine how to use different cultures to get a desired flavor characteristic,” Joey Widmer explains. “The culture company brought in samples for us to try of different cheeses using various cultures to create unique flavor characteristics. From there, we chose an alpine-style characteristic to accompany our current cultures to start test batches of our Matterhorn Alpine cheddar in March of 2019.”

Widmer Cheese Cellars’ cheesemakers sampled the batch monthly, waiting for the cultures to develop the target flavor profile, he notes. They ultimately determined the exact amount of culture to add and the minimum aging time of eight months.

“Then we contacted our distributors and arranged to send them samples of the new cheddar,” Joey Widmer says. “After our distributors tried it and approved, we successfully set it up as a new item.”

Speaking of distributors, Widmer Cheese Cellars relies on approximately 10 major organizations to get its cheese out in the market. The company’s products enjoy “a broad geographic reach,” Joe Widmer says, in supermarkets, foodservice, and other outlets across the nation.

“You can more commonly find our cheeses in the Midwestern states,” he says. “However, we are starting to see more specialty cheese shops and restaurants carry our cheese beyond the Midwest. Our Mild brick is being used at restaurants in places like California that make Detroit-style pizza.”

Internet sales also continue to rise year after year, Joe Widmer notes, with the holiday season being particularly busy. In fact, these direct-to-consumer sales are the main reason the company expanded its factory’s packaging and cold storage areas in 2004 — and again in 2016.

In marketing its cheese products, Widmer’s Cheese Cellars aims to connect with “cheese lovers, foodies, and individuals who are looking for a specialty food item and are willing to spend a little more for quality,” Joey Widmer explains. The company currently advertises in local county print media within the Midwest, as well as in magazines such as Milwaukee and Our Wisconsin.

“We also advertise online through social media outlets such as Facebook, Instagram, and Twitter,” he adds. “We do online holiday advertisements with Spectrum/Charter, as well as television commercials that air locally.”

On the social media front, Joey Widmer says the company also uses Facebook and Instagram “heavily” to share Widmer Cheese Cellars’ heritage and its historical photographs. Social media was the chosen vehicle, too, for introducing the Matterhorn Alpine cheddar.

Joe Widmer says the main selling points for marketing and advertisements are that Widmer’s Cheese Cellars 1) has been “producing quality handcrafted cheese since 1922” and 2) uses “the same tradition and recipes passed down through four generations of cheesemaking.”

Looking to the future

As Widmer’s Cheese Cellars celebrates its 100th anniversary this year, it also will be planning for its future and the growth that hopefully will come with it. In doing so, it will have to work out the same labor-related issues that many other cheese processors and other manufacturers are experiencing.

“One of the challenges that we face is recruiting, hiring, and holding on to key employees,” Joey Widmer explains. “The dairy industry requires hard work, dedication, and long hours that often require manual labor.”

The company currently is addressing these challenges by cross-training its employees in multiple job tasks, he says. It also turns to social media for attracting and hiring new talent.

“It is important to offer a competitive wage to comparable jobs within the industry and treat current and new employees with integrity and respect,” Joey Widmer points out.

For continued success, Widmer’s Cheese Cellars also must continue to embrace its heritage of “producing quality handcrafted cheese since 1922,” he says. Traditional recipes and traditional methods will be important in upholding the quality of its products.

“With that being said, we are looking for ways to incorporate value-added equipment and continually look for ways to automate some of our processes,” Joey Widmer says.

Ultimately, Widmer’s Cheese Cellars’ rich family history — and the pride the company’s employees take in producing a quality cheese product — will help ensure continued success in the years to come.

“You have to take no shortcuts and accept nothing less on a daily basis,” Joe Widmer stresses.

Enough of the plant-based hype

Moo-Ville Creamery’s dairy products are fresh from the farm

Crave Brothers Farmstead Cheese’s plant is a model of sustainability

2019 State of the Industry report: Cheese has a favorable deck