Tucked into a residential neighborhood in the small village of Theresa, Wis., Widmer’s Cheese Cellars’ combined headquarters and cheesemaking facility bears little resemblance to an industrial operation from the outside. In fact, the building looks much like an oversized version of the quaint old homes surrounding it.

But looks can be deceiving. Inside, skilled cheesemakers produce about 2,000 pounds a day of cheese in a 19,000-square-foot processing facility — combining old-world techniques with modern technology. The plant — opened 100 years ago in a pre-1900s structure — specializes in brick, cheddar, and colby cheeses, many of which have won awards (see the Processor Profile). It transforms approximately 30,000 pounds of milk into about 3,000 pounds of cheese each day.

The road to brick cheese

Cheesemaking at Widmer’s Cheese Cellars begins with the pickup of milk the prior day. That milk is stored overnight and then undergoes high-temperature/short-time pasteurization the next morning (at 161 degrees Fahrenheit for 15 seconds), notes Master Cheesemaker Joe Widmer, who is president and owner of the company founded by his grandfather, John Widmer.

The milk next goes to an open stainless-steel vat, where it cools to 85 or 90 degrees Fahrenheit before cultures specific to the cheese type are added. After the cultures do their work with the help of automatic stirring paddles, rennet is added for coagulation, Joe Widmer says. The timing between culturing and rennet addition — and between rennet addition and the next step — is tied to the type of cheese being produced.

During Dairy Foods’ visit, the plant’s cheesemakers were making brick cheese — a Wisconsin original. Widmer’s Cheese Cellars produces a mild brick cheese, but is more notable for being the only cheese producer that still makes a variety in the traditional aged, surface-ripened style of brick cheese inventor John Rossi.

After the cheese curdles, the plant’s cheesemakers use wire knives to cut it into small cubes. The automatic paddles also stir the mixture until the big, soft curds are ready in terms of firmness and acidity. The cheesemakers then drain the liquid whey from the vats, Joe Widmer explains. The whey is sold off for animal feeding applications.

Using buckets, the facility’s cheesemakers then scoop up the curds, placing them into numerous stainless steel forms. The curds are leveled, covered and then topped with actual bricks — the same 100-year-old bricks used by Joe Widmer’s grandfather — to help press out any remaining whey. Each form — or hoop — is flipped three times during the day.

The bricks are then removed, and the formed cheese goes through a brining process in a 90% salt solution the next morning, Joe Widmer says. The cheese remains in the brining solution for 10-12 hours.

After brining is complete, the cheesemakers move the cheese to fiberglass shelves in the plant’s temperature-controlled curing room. The mild brick cheese stays in the curing room for three days, he explains. The traditional, authentic brick cheese, meanwhile, is aged in this room for a full 10 days. Cheesemakers wash the authentic cheese with B-linen inoculated whey and turn it daily to help in the development of a good rind (in the case of the authentic brick cheese).

After aging, cheesemakers transfer the cheese to the packaging room, where it is vacuum packaged before being transferred into a cold storage room. From there, it is ready for sale in approximately two weeks. 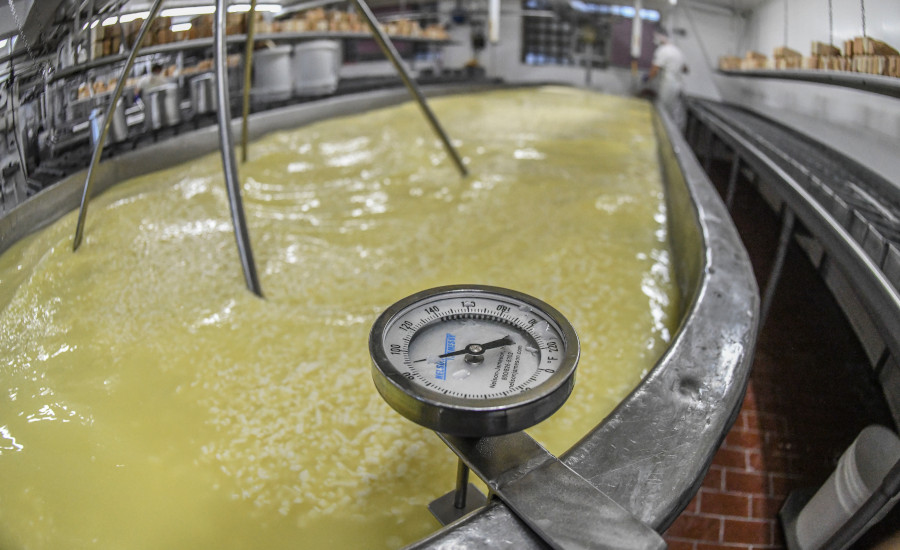 The cultures do their work with the help of automatic stirring paddles.

Blending the old with the new

The plant employs approximately 18 people (not including on-site office workers) in both full-time and part-time positions. Three of those employees handle sales within the small cheese retail store that also provides an up-close viewing area for cheesemaking operations.

“Literally every object and piece of equipment are on the list, and we have a schedule of when everything is due to be cleaned,” he says.

Because Widmer’s Cheese Cellars prefers to use traditional methods of cheesemaking, it relies heavily on “old-fashioned” equipment that has been in place for years, Joey Widmer says. “From a production standpoint, we make the cheese in small artisan batches using traditional hand-crafted methods passed down through four generations,” he says.

Additional modern technology is on the plant’s wish list.

“We would like to put in new cheese vats and also make the production easier by adding automated efficiencies without decreasing the quality of our product,” Joey Widmer says. “We would like to improve efficiencies in packaging to increase our volume of smaller retail cuts and snack-sized cheeses.” 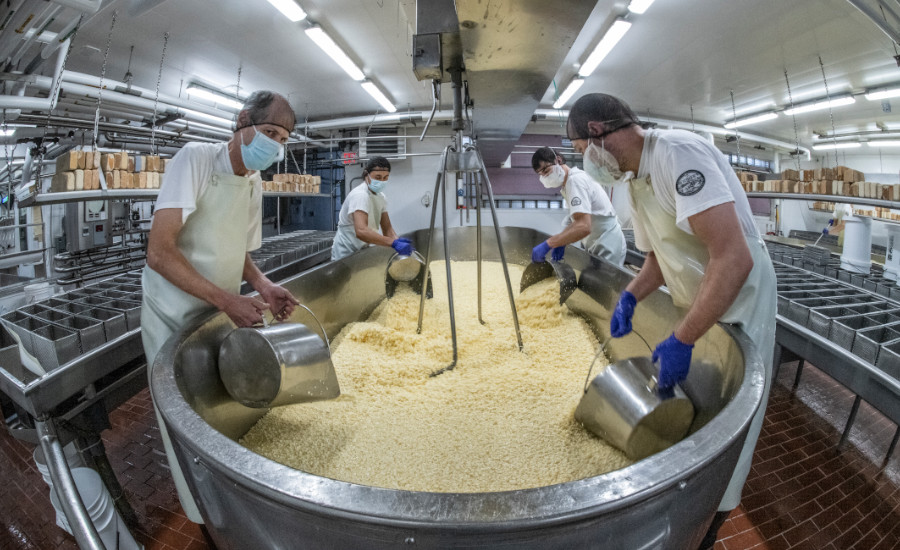 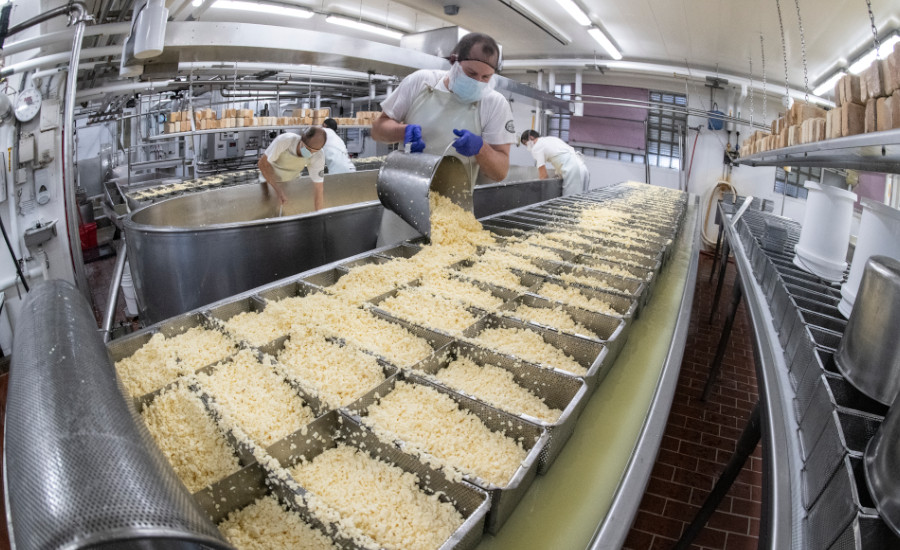 Using buckets, the facility’s cheesemakers then scoop up the curds, placing them into numerous stainless steel forms.

No shortcuts on safety

“The fact that we are smaller allows us to oversee all parts of the operation and to ensure that safety is being adhered to,” he stresses.

“The fact that everyone is involved creates a greater level of understanding and teamwork within the group,” he points out. “They develop a deeper appreciation and understanding of the entire process of food safety — from picking up the milk to loading the product onto a truck for delivery.”

If longevity is any indication of success on the food safety side, Widmer’s Cheese Cellars’ plant has been operating for 100 years. And during that long time span, the facility has undergone the scrutiny of numerous state and federal inspectors.

“When inspectors come to our facility, we get their feedback, and they usually tell us that [the plant] is very clean and organized,” Joe Widmer says. “When there is negative feedback, we develop a root cause analysis and a corrective action plan. We are also audited by a third party on an annual basis.”

Widmer’s Cheese Cellars also has a stringent environmental monitoring program within its food safety plan to test areas within the plant for cleanliness, he notes. In addition, the facility performs microbiological testing on finished product to confirm that product adheres to specifications.

Like any other cheesemaking operation, Widmer’s Cheese Cellars’ plant does face some challenges. One is that its traditional hands-on approach to cheesemaking is extremely labor-intensive, Joe Widmer says. That’s an unfortunate reality as dairy processors across the country face worker shortages.

That being said, Widmer’s Cheese Cellars likes to hire employees who have experience working at other food plants or in environments similar to its own, Joey Widmer says.

“We have some employees who have worked at larger corporate food facilities, and they can offer different perspectives or ways of doing things differently,” he notes. “We also like to see any kind of education regarding food science or food safety training.” 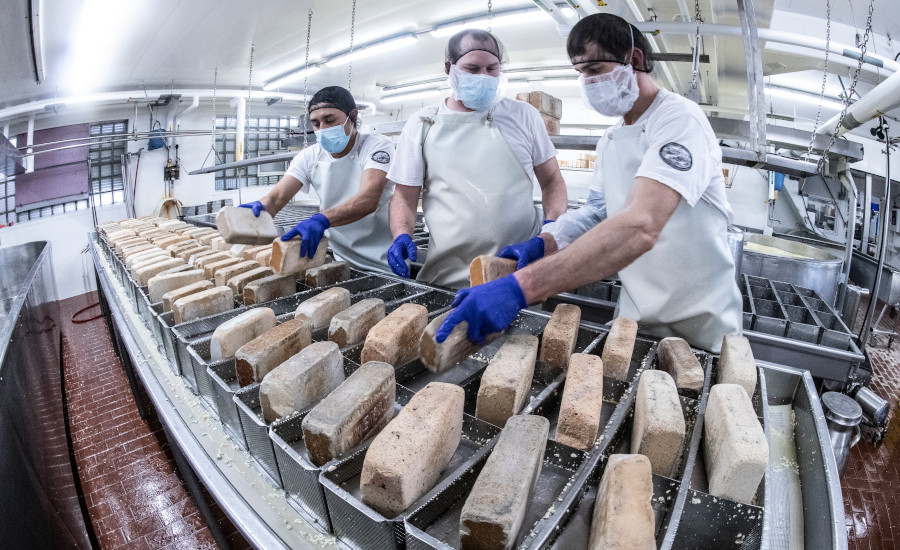 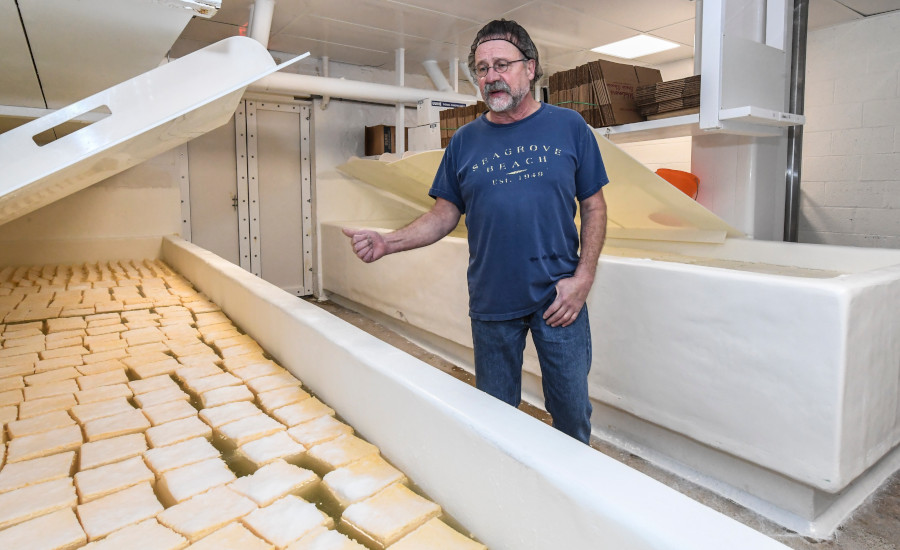 (left) The curds are leveled, covered, and then topped with actual bricks — the same 100-year-old bricks used by Joe Widmer’s grandfather — to help press out any remaining whey. (right) The formed brick cheese goes through a brining process in a 90% salt solution the next morning.

The facility also is growth-challenged by the fact that it is land-locked, without a lot of room to further expand, Joe Widmer points out. Moreover, constant adjustments are a reality — for example, demand for “small retail pieces” is rising, while that for 5-pound bulk blocks is on the decline.

As Widmer’s Cheese Cellars tackles those challenges, it also is investing in sustainability-minded projects. For example, it maintains separate recycling cans in the employee breakroom and uses bulk recycling dumpsters to dispose of its cardboard, paper, and other mass recycling waste, Joey Widmer says. Recently, it began reusing its in-house cardboard cases, too.

“Instead of disposing of cardboard cases, we continue to reuse them until they are no longer intact,” he explains. “Most of our lighting within our facility has been converted from fluorescent to LED.”

Next on the agenda? An alternative energy source, perhaps.

“We have recently started looking into solar panels for the roof of our facility, which could potentially reduce energy usage and costs,” Joey Widmer says.