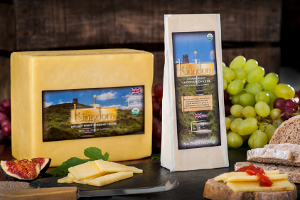 Kingdom Cheddar, the first and only European cheese to be certified organic by the USDA, is the newest entry into the U.S. cheese market.

With it comes the authentic Cheddar taste that comes from more than 800 years of English artisan craftsmanship. The milk in Kingdom Cheddar comes from a small group of organic family farmers in South-West England, where Cheddar cheesemaking first began in the 12th century. The mature Cheddar is aged in climate-controlled chambers or caves, a time-honored tradition of cheesemakers in the area, according to the company.

Kingdom Cheddar’s production is managed by the Organic Milk Suppliers Cooperative (OMSCo), the largest organic dairy farmers' co-operative in the United Kingdom. The cooperative has partnered with Wisconsin-based Organic Valley cooperative to distribute it in the United States. It’s now available in many Whole Foods Markets and other natural grocers. Kingdom Cheddar is certified to the USDA's National Organic Standards.