This website requires certain cookies to work and uses other cookies to help you have the best experience. By visiting this website, certain cookies have already been set, which you may delete and block. By closing this message or continuing to use our site, you agree to the use of cookies. Visit our updated privacy and cookie policy to learn more.
Home » Butter stars in new Original Flaky Crust pies from Mrs. Smith's
Dairy Foods & BeveragesButterFrozen DessertsNew Dairy Products
Pie 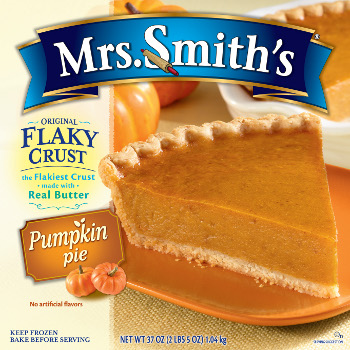 Mrs. Smith’s (part of the The Schwan's Consumer Brands, Marshall, Minn.) introduced a brand new line of pies — Original Flaky Crust. Made with real butter, the new pies have zero grams of trans fat per serving.

The pies come in six flavors — apple, Dutch apple, cherry, peach, pumpkin and sweet potato. The new line hit stores nationwide just in time for the holiday season, and are available for suggested retail price of $6.99.

The pies feature a new crust recipe that's made with real butter, giving it that flaky crust. Visit Mrs. Smith’s on Facebook starting in November for a chance to win a prize. Digital coupons for the new pie line will also be available with the contest through December 10th.