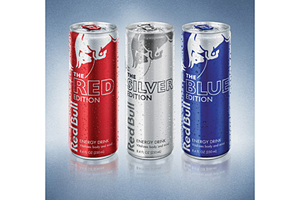 Red Bull USA, Santa Monica, Calif., is launching three new flavored energy drinks called Red Bull Editions in March 2013. The new line will include The Red Edition, The Silver Edition and The Blue Edition, which offer cranberry, lime and blueberry flavors, respectively. Each flavor has the same energy and functional benefits as the original Red Bull. The drinks will be sold individually in 8.4-ounce cans and in four-packs.