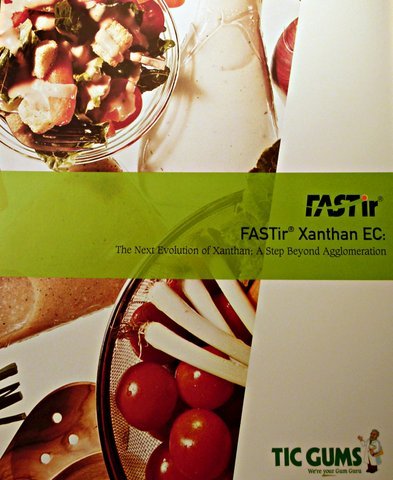 TIC Gums introduced a new brochure on its FASTir Xanthan EC product line. FASTir Xanthan EC is a high-quality alternative for food manufacturers when Xanthan is priced high, in short supply or both. Like traditional Xanthan gum, FASTir Xanthan EC controls the structure of water within food products, allowing formulators to manage and manipulate the texture of viscous liquids. The new brochure is available for immediate download.

Corn Products International intends to change its name to Ingredion to signify its role as a global ingredients solutions company. The name change is part of a global strategy that included the acquisition of National Starch Food Innovation in late 2010. The name change is subject to shareholder approval, and a proposal to approve the change will be included in the company’s proxy statement for its annual meeting in May.

Barry Callebaut conducted a study that proves chocolate can be good for the brain. Sixty-three individuals between the ages of 40-65 were observed in a randomized, controlled, double-blind study over a 30-day sample period. They were divided up into three test groups and consumed a prescribed drink daily. The composition of the chocolate drink varied with regard to the proportion of cocoa flavanols they each contained: For group 1, the cocoa drink contained 10 grams of dark high flavanol chocolate, for the second group, 10 grams of conventional dark chocolate and for the control group, a drink with 10 grams of dark chocolate. During the sample period, the test subjects were not allowed to consume products containing caffeine, flavonoid-rich fruits or an excess of alcohol so as not to influence the results of the study. The Steady State Visually-Evoked Potential method (SSVEP) was used to measure human brain activity. In order to compare brain activities, on the first and on the 30th day, computer-tomography (CT) brain scans of the test subjects were made while participants solved tasks dealing with spatial working memory. The results show that the brains of individuals who consumed the cocoa drink with a medium or high proportion of cocoa flavanols were less strained than those in the control group without cocoa flavanols. Download the abstract of the study here.

Ocean Nutrition Canada (ONC) acquired a fish oil refining plant in Piura, Peru, enabling the omega-3 supplier to offer its customers a completely integrated supply chain, from primary processing to finished ingredient. The Piura facility has been the primary refining facility for the organization for more than four years through an exclusive partnership with Peruvian food company Alicorp S.A. ONC incurred the 108 employees at the Piura facility, bringing the company's total employees to more than 400.

On the Move: Personnel Changes
Kappus Co., Cleveland, Ohio: Mike Romanchek was named director of sales and marketing, responsible for building customer relationships and developing new sales growth potential. Romanchek began his career as an officer in the United States Marine Corps. After leaving the Corps, he practiced his management skills through market development, strategic sales and new product launches.