This website requires certain cookies to work and uses other cookies to help you have the best experience. By visiting this website, certain cookies have already been set, which you may delete and block. By closing this message or continuing to use our site, you agree to the use of cookies. Visit our updated privacy and cookie policy to learn more.
Home » Ben & Jerry's unveils a new ice cream “Core” line
Dairy Foods & BeveragesIce Cream/NoveltiesNew Dairy Products
Ice cream 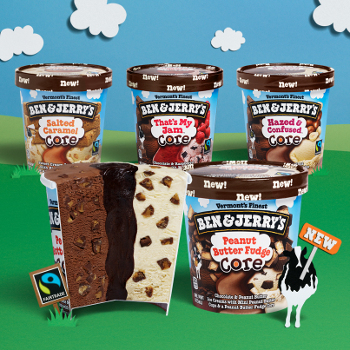 Ben & Jerry’s announced its brand new Core line in February, modeled off Ben & Jerry’s original Core flavor — Karamel Sutra. The concept includes a core center down the middle of each flavor, which complements the other two ice creams in the pint.

The flavors were created by Ben & Jerry’s team of Flavor Gurus at the company’s headquarters in Vermont. The four new Core flavors are:

All four of the new ice cream flavors are available in stores now for a suggested retail price of $4.39 per pint. Handmade Core Sundaes featuring a core of hot fudge or caramel between your two favorite flavors will be available in Ben & Jerry’s Scoop Shops beginning this spring.

Ben & Jerry's, Burlington, Vt., is a subsidiary of Unilever.