Other dairy processors in the news: Brookshire Grocery, Dean Foods. 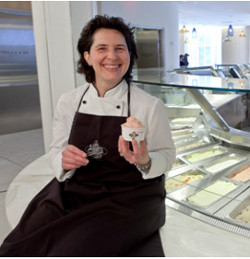 Vivoli Il Gelato of Florence, Italy, in March opened its first-ever location outside of Florence in New York City on the sixth floor of Macy’s Herald Square store. The store will serve nine gelati and three sorbetti, all made fresh daily, in cups, pints and quarts. Third-generation gelato-maker Silvana Vivoli (shown) will direct the New York store. Vivoli's grandfather, Raffaello, opened Vivoli in the 1930s.

Shamrock Farms, Phoenix, said in March it is building a $50 million state-of-the-art dairy manufacturing facility in August County, Virginia. The plant will produce the company's on the go mmmmilk and Rockin’ Refuel protein fortified milk beverages. The brand has also expanded its national business in convenience stores, grocery and quick service restaurants such as Subway, Arby’s and Einstein Brothers. The 130,000-square-foot plant is expected to open in late 2014 and will employ up to 60 people.

Dean Foods Co., Dallas, has met the requirements for the U.S. Environmental Protection Agency's "Energy Star Challenge for Industry" by reducing its energy intensity by 10% or more at 18 manufacturing locations nationwide.