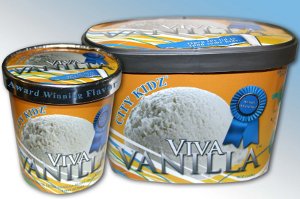 The City Kidz Food Science Educational Lab National Initiative was created because most students in middle school and high school do not realize that food science and food technology careers exist, says program director Clinton Bush. In fact, from 2005-2010, the U.S. Department of Agriculture, Washington, D.C., reported that there is a shortage of students pursuing careers in food science and food technology industries, he adds. In that mix, African-Americans, Latinos and Native Americans are seriously underrepresented in this industry and at the post-secondary educational level. In an effort to address this problem, the USDA is offering multi-cultural grants to encourage African-Americans, Latinos and Native Americans to consider pursuing an education and career in food science and food technology.

Fifteen honor students from Jacksonville created the Viva Vanilla ice cream recipe, according to Clinton Bush, the program director.  Proceeds from the sales of the ice cream will be used to help offset the students' educational expenses. Corporate sponsorship partners of City Kidz Food Science


Read more about City Kidz in the June 2011 Dairy Foods.

Welcome to the Ice Cream Club