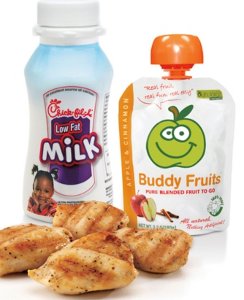 Chick-fil-A on Monday said it has developed "one of the nation's most nutritious kid's meals." The four beverage choices on the new menu are 1% milk, 100% apple juice, freshly squeezed lemonade and water.

The menu includes Grilled Chicken Nuggets and "enhanced" side dishes, including applesauce to complement a fruit cup option added in 2004. A meal consisting of grilled nuggets, fruit cup and 1% milk contains 210 calories and 3 grams of fat. That is an 86% cut in fat grams and a 56% calorie reduction compared with its previous offerings, Chick-fil-A said. It calls the meal "one of the most nutritious children's meal combinations offered among any major fast food chain."

"While we are excited about the moves we have made on the Kid's Meal menu, we also are extremely proud of the progress we have made with our overall menu," said Woody Faulk in a statement. Faulk is Chick-fil-A’s vice president of brand strategy and design, who oversees Chick-fil-A’s menu.

Atlanta-based Chick-fil-A, Inc. is the nation's second-largest quick-service chicken restaurant chain (based on sales), with more than 1,600 restaurants in 39 states and Washington D.C. It was named Top Large Chain by Zagat's National Fast Food Survey of 6,000 customers in 2011, and Consumer Reports named the chain the nation's top chicken chain in its August 2011 Quick Service Restaurant survey of 36,000 readers.

Fairlife’s yogurt is on the menu at Chick-fil-A