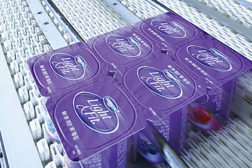 In the United States, the yogurt category “leveled off” in the fourth quarter.

The company saw "significant consumption growth" in its natural cheeses and Velveeta business in the first three months of the year.

"We're off to a solid start," said Tony Vernon, CEO of Kraft.  "Our first quarter results reflect strong returns on our new product innovations to date, as well as the fact that our cost savings outpaced our plans to reinvest in our brands."