Our exclusive ranking of North America’s largest dairy processors shows the sales, brands, products and plant locations. Here, I look at the companies through a lens of ownership and productivity.

Coverage of our 24th annual ranking of the largest dairy processors in North America is available here. Nestle USA once again heads the list and Ellsworth Cooperative Creamery holds down the No. 100 spot.

Besides annual sales, there are a lot of other ways to look at the Dairy 100. I’ve extracted some additional data here. For instance, we wanted to see what the average North American dairy plant can produce in a year. Granted, this is an imprecise calculation for many reasons. The plants manufacture a wide range of dairy (milk, cheese, ice cream, yogurt, dry dairy ingredients) and nondairy (plant-based “milks,” waters, juices and iced teas) foods and beverages.

We don’t have exact revenues for some processors so we made estimates. Some companies are better described as finishers or packagers rather than processors. (Still, a billion-dollar cut-and-wrap operation cannot be dismissed.) Taking all of that into account, we calculated that the average plant owned by the Dairy 100 generates sales of nearly $262 million. (Companies for which we estimated revenues are not included in the top 10 shown.)

More than half (54) of the companies are privately held businesses. There are 25 cooperatives, 20 publicly held firms and one employee-owned dairy (Litehouse Foods). 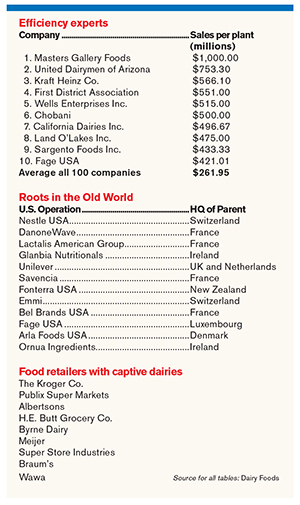 To gain a foothold in the United States or to expand their presence here, Europeans are striking deals with U.S. dairies. One prominent joint venture is between Dairy Farmers of America and Arla Foods USA (whose parent is in Denmark).

Another way to look at ownership is by type of parent company. Some supermarkets and convenience stores operate dairies. (See table.) The largest of these captive dairies belongs to The Kroger Co. These captive dairies make their own store brands, and some manufacture products for other companies. Most of the Dairy 100, in fact, provide co-manufacturing services. For No. 2 Dean Foods Co., 51% of its annual revenue comes from private label manufacturing. Co-packers can be an important resource for start-up and small dairy brands.

Having spent the month reading annual reports and other documents, I have a few predictions for the year ahead. Here are three: European dairies will cut deals with U.S. firms; legacy, family-owned U.S. dairies will be bought; and investments in equipment will be focused on automating the process.