Dry Whey prices received for bag, tote, and tanker sales meeting USDA Extra Grade standards averaged 65.4 cents per pound for the week. The US price per pound increased 0.7 cent from the previous week.

Dunkin' Donutsintroduced the Texas Toast Grilled Cheese Sandwich which is made with two slices of American cheese and one slice of white cheddar cheese melted between two pieces of thick-cut Texas Toast and served oven-toasted. It can be ordered with bacon or ham. The sandwich is the newest addition to the chain's menu of made-to-order sandwiches. 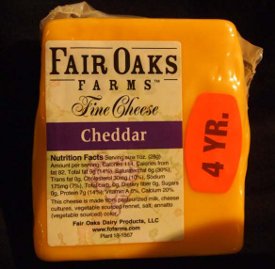 produced under the Fair Oaks Farms Fine Cheese label and sold between Sept. 30 and Dec. 3. These cheeses have the potential to be contaminated with Listeria monocytogenes. The cheeses were sold at the Fair Oaks Dairy store in Northwest Indiana, to other stores directly, and through distributors primarily in Northern and Central Indiana and Northeast Illinois. One store in Sulphur Springs, Texas area also has received the product.
Consumers with questions may contact Customer Service at 847-884-000 or at 630-673-5200 if calling after 11 p.m EST. The lines will be answered twenty four hours per day, seven days a week.
Founded in 2004, Fair Oaks Dairy Products is a producer of dairy products, including milk, ice cream, cheese and butter based in Northwest Indiana

Carmine C. Catalana III, chairman of the board of Cumberland Dairy, Rosenhayn, N.J., died Dec. 8, 2011 at the age of  81. Under his direction, Cumberland Dairy grew from a small, local dairy to one of the largest producers of specialty dairy products on the East Coast, according to a tribute on the company's website. Under his leadership in the 1980s, Cumberland was one of the first dairies to install an ultra-high temperature pasteurization system that gave products a longer shelf-life. Today the processor has one of the world’s largest direct injection systems for producing aseptic milk. Mr. Catalana served on the board of directors of the New Jersey Food Processors Association, and was a trustee for the New Jersey Milk Association. He is survived by his wife, Terry; five children, Carmine IV, Frank, Michael, David and Maria; and 13 grandchildren.

In 2011 there has been an abundance of published research from world renowned nutritional scientists and universities, revealing the health benefits of dairy, says Donald Moore, executive director of the Global Dairy Platform, Rosemont, Ill.. Here are 11:

To search for food based guidelines that may include dairy recommendations, visit the FAO Food Guidelines by Country website: www.fao.org/ag/humannutrition/nutritioneducation/fbdg/en.