As the world churns

Churning schedules have slowed in the Northeast but remain strong in the Central states. 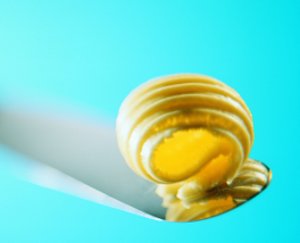 The following is from the USDA’s Dairy Market News for the week of July 27 to 31, 2015. Read the full report here.
Churning rates have slowed due to the tightness of cream. When there are opportunities, some manufacturers are selling available cream for better profit margins. Some butter producers are taking advantage of the available time in production schedules for maintenance projects. Demand remains strong. Some manufacturers note an increase in sales. Others are adding to inventory levels. The current pricing ups and downs have some manufacturers concerned. Friday at the CME Group, Grade AA butter closed at $1.9900, up $.0350 from last week’s close.

Butter prices in the Northeast fell 45 cents in a week to $2.96 a pound

NORTHEAST. Churning schedules have slowed in the Northeast as some manufacturers are taking advantage of the fairly high cream multiples and selling cream. This situation is offering those plants opportunities to complete overdue maintenance projects. Demand is good with retailers submitting their orders for Q4. Current package butter production is filling existing orders, while most of the bulk production is adding to supplies. The current bulk butter prices are 5 to 6 cents over the CME Group market, with various time frames and averages used.
According to the DMN National Retail ReportDairy, for July 24-30, the U.S. weighted average advertised price for 1-pound butter is $3.29, down 20 cents from a year ago, but up 3 cents from the previous week. The Northeast average price is $2.96, down 45 cents from last week. In the Southeast, the butter price averaged $3.00, up 61 cents from a week ago. Tuesday’s CME Group cash trading saw Grade AA butter close at $1.9025, up $0.0700 from a week ago. According to NASS, U.S. butter in storage on June 30, 2015 totaled 254.7 million pounds, 4% less than the previous month, but 28% more than a year ago.

CENTRAL. The market tone remains strong. Churning is active even as ice cream production continues to pull heavily on cream supplies. There are some butter producers that prefer to sell available cream instead of churning. Some manufacturers are reporting butter sales are increasing. Due to the tightness in cream supplies, some butter producers are delaying orders and diverting milk into cheese. According to the DMN National Retail Report-Dairy, for July 24- 30, the national weighted average advertised price for a 1 pound package of butter price is $3.29, a 3 cent increase from last week but a 20 cent decrease from a year ago. The weighted average price in the Midwest was $2.50. Bulk butter prices are at 6 cents under market to 2 cents over market, based on the CME Group and various indices. The Grade AA butter price at the CME Group closed Wednesday at $1.9075, increasing 3.25 cents from last Wednesday.

WEST. West butter contacts are comfortable with current inventories. Domestic demand remains good and prices have moved higher. Manufacturers have adjusted production to meet their current needs, maintain inventories, and take advantage of opportunities to sell cream. Some butter makers report slowing or temporarily suspending production, while others have shifted more production to print butter instead of bulk. Most industry contacts say there is still considerable demand for cream and good returns from cream sales. The DMN National Retail Report–Dairy for the week July 24 – 30, found that the U.S. weighted average advertised price of 1 pound butter is $3.29, up $.03 from one week ago but down $.20 from one year ago. In the Southwest, the weighted average advertised price for 1 pound butter was $3.86 with a price range of $2.99 - $5.49, and in the Northwest, $3.47 with a price range of $2.50 - $3.99. Bulk butter pricing in the West this week is 4 cents under market to 5 cents above, based on the CME Group with various time frames and averages used. The Grade AA butter price at the CME Group on Wednesday closed at $1.9075, up $.0325 from a week ago.