Cincinnati’s Graeter’s plans an ice cream scoop shop in a Chicago suburb, its first outside of its home base

The company will serve about 30 flavors of ice cream, gelato and sorbet every day, plus additional seasonal offerings. 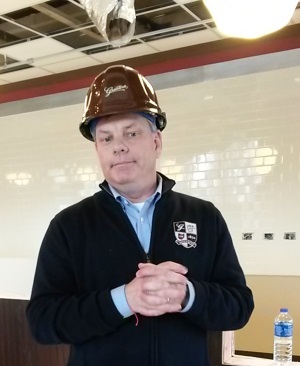 Ice cream maker Chip Graeter (left) traded in a hairnet for a hardhat today as he toured reporters through the company’s soon-to-be opened ice cream shop in the Chicago suburb of Northbrook. The store, scheduled to open in late May, will be the first location in the Chicago area for the 145-year-old, family-owned ice cream business.

Chip Grater is a member of the fourth generation of the family. He oversees the company’s retail operations.

Cincinnati-based Grater’s operates about 35 stores in its hometown, in communities across the Ohio River in Northern Kentucky, and in Columbus and Dayton.

The store, in a former Caribou coffee shop, will serve ice cream, gelato, sorbets, handmade chocolates and coffee, and sell packaged pints and ice cream-related merchandise. The shop will have seating for about 35 at tables and at a high-top window facing Shermer Road. Graeter’s will make weekly deliveries from its factory in Cincinnati, Grater said. If the store does well, the company will add more in the Chicago area, he said. The company also considered locations in Cleveland and Nashville. Retail sales in Chicago have been doing well, he said.

Dairy Foods selected the Graeter's ice cream facility as its Plant of the Year in 2011. Read 'Graeter's Runs a Hands-on Ice Cream Plant.'