This website requires certain cookies to work and uses other cookies to help you have the best experience. By visiting this website, certain cookies have already been set, which you may delete and block. By closing this message or continuing to use our site, you agree to the use of cookies. Visit our updated privacy and cookie policy to learn more.
Home » Kraft says 2014 revenues were unchanged; names Zoghbi COO
Dairy Processor NewsTop 100
The corner office 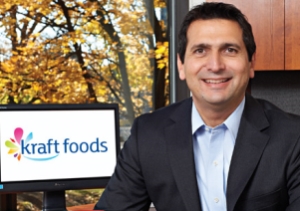 George Zoghbi (pictured right), currently Vice Chairman, Operations, R&D, Sales and Strategy, has been named Chief Operating Officer of Kraft Foods Group, Northfield, Ill.
The company also announced last week that Chris Kempczinski, who currently leads Kraft's Canada business unit, will assume an expanded role as Executive Vice President of Growth Initiatives and President of International. Both management appointments are effective immediately and will report to Chairman and CEO John T. Cahill.
Kraft also reported that revenues for the year ended Dec. 27, 2014 were $18.2 billion (a decrease of 0.1% from the previous period). In the company’s Cheese segment, full year net revenues of $4.1 billion increased 3.6%, driven by higher commodity cost-driven pricing that was partially offset by unfavorable volume/mix. Unfavorable volume/mix reflected volume losses from price increases that were tempered by an increase in shipments of string cheese following a 2013 recall. Full year operating income in the Cheese segment increased 3.5% from a combination of higher net pricing and lower spending on both cost savings initiatives and marketing activities. The company said “this favorability was partially offset by record high dairy costs, unfavorable volume/mix and higher manufacturing costs.”
As COO, Zoghbi will oversee the company's U.S. business units and the teams that drive growth across Kraft, including sales and marketing services. He will continue to lead Kraft's integrated supply chain, working closely across all operations to make appropriate investment decisions, drive productivity and deliver strong execution of the company's innovation and brand marketing plans.

As part of its leadership changes, the company also announced that Teri List-Stoll, Executive Vice President and Chief Financial Officer, will be leaving the role effective Feb. 28, 2015. List-Stoll has been with Kraft since Sept. 2013 and led the company's financial operations, including accounting and reporting, financial planning, treasury, tax, audit and investor relations. List-Stoll will continue to serve the company as a senior advisor to ensure a smooth transition. The finance function will report directly to Cahill until a CFO is appointed.
Kraft also announced the departures of three other executives:

George Zoghbi is Kraft's COO. Most recently, he served as Vice Chairman, Operations, R&D, Sales and Strategy. He held the position from June 2014 to February 2015, overseeing several key business areas including the manufacturing and sales teams, as well as R&D, which drives Kraft's innovation, product quality improvement and development.
Previously, Zoghbi served as President of Cheese & Dairy from 2009-2014, in addition to leading Kraft's global export business. He led the business in a turnaround that has delivered outstanding top-line and bottom-line growth. Under his leadership, the Cheese & Dairy business unit was the first to implement the company's Integrated Business Planning initiative that aims to strengthen sales forecasting and supply chain planning, which is rolling out companywide.
Zoghbi began his Kraft career with the company's global business - now known as Mondel?z International - in 2007 as Vice President and Area Director of Australia and New Zealand, where he oversaw all aspects of the regional business.
Prior to joining Kraft, Zoghbi held a variety of leadership roles at Fonterra, the world's largest dairy exporter. His accomplishments there included driving for operational excellence, integrating several acquired businesses and delivering growth through new channels.
Source: Kraft Foods Group

Q2 cheese revenues rise at Kraft; net revenues for the company down 1.1%