Orwigsburg, Pa.-based Yuengling's Ice Cream is bringing its iconic Pennsylvania ice cream back to grocery store shelves. The ice cream, which was first made in 1920, is coming back after a 28-year hiatus. 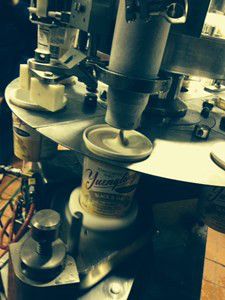 Leiby's Dairy in Tamaqua, Pa., will be producing the ice cream. The initial run will consist of 100,000 quarts, in 10 flavors. The ice cream is expected to be available in grocery stores by mid-February. It initially will be sold at Acme, Weis and select independent grocery stores in Pennsylvania, Maryland, Delaware, New Jersey, New York and West Virginia.

"It's a very exciting time for us," said David Yuengling, president. "We originally expected production to begin in March, but when we announced in September that we were bringing back Yuengling's Ice Cream, the response was so enthusiastic that we pushed up production."

The suggested retail price is around $5.49 and $5.99 per quart. The premium ice cream line is available in ten all-natural flavors:

The ice cream is made using only all-natural ingredients. The milk and cream are locally sourced in Pennsylvania, with production also in Pennsylvania.