The WhiteWave Foods Co., Denver, (NYSE: WWAV) reported net sales for the third quarter ended Sept. 30 increased 10% to $639 million compared to the third quarter of 2012. This was due to continued volume growth across the company’s North America and Europe segments, WhiteWave said.

The company’s North America segment is comprised of three platforms: 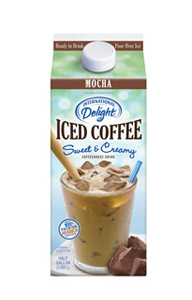 In the North America Plant-based Foods and Beverages platform, which includes Silk soy milk, almond milk and coconut milk, third quarter net sales increased 14%, primarily because of the growth of Silk almond milk which grew over 60% during the third quarter.

In Premium Dairy, which includes Horizon Organic branded dairy products, volume growth drove net sales to increase 3% in the third quarter of 2013 compared to the third quarter of 2012. Growth was driven by Horizon Organic brand half-gallon offerings. The growth rate in the quarter was negatively impacted by approximately 3 percentage points due to the Company’s decision to exit some private label manufacturing arrangements, and the discontinuation of a contract with a national coffee chain that is now focused on only offering its own brands within its stores.

In Coffee Creamers and Beverages, which includes coffee creamers under the International Delight and Land O Lakes brands, as well as International Delight Iced Coffee, net sales increased 9% in the third quarter of 2013 compared to the third quarter of 2012, due in part to strong growth in club stores, foodservice, convenience stores and other away-from-home channels.

Consolidated revenues for the quarter amounted to Cdn$2.230 billion, an increase of 27.8% compared to the corresponding quarter last fiscal year. This increase was mainly due to the inclusion of the revenues derived from the Morningstar acquisition, the company said.

Also, higher selling prices in relation to the higher cost of milk in both the Canada and International Sectors, as well as a better product mix in the Canada Sector, contributed to this increase. Lower cheese sales volumes in the USA Sector, as compared to the corresponding quarter last fiscal year, partially offset this increase.

The fluctuation of the Canadian dollar versus the US dollar and Argentinean peso increased revenues by approximately $10 million.

For the six-month period ended Sept. 30, revenues totalled $4.404 billion, an increase of 27.9% in comparison to the corresponding period last fiscal year. The inclusion of revenues derived from the Morningstar Acquisition principally contributed to this increase.