Concentrated milk or whey protein ingredients are often added to cultured dairy beverages to boost the protein level and to contribute to viscosity and mouthfeel.

Greek introductions continue to dominate growth in the yogurt category, but the other cultured segment to watch is drinkable yogurt. Volume sales in 2012 were 211 million pints and the latest IRI data for 2013 showed yogurt drinks experiencing double-digit growth in the United States. This trend was fueled by products for children under 6, drinks for the breakfast occasion, and consumption in Hispanic households with five or more members.

Cultured dairy beverages include drinkable yogurt and a variety of fermented milk drinks with origins in various countries (see the table). Many cultured dairy beverages contain probiotic bacteria. Fermented milk drinks, because of their short refrigerated shelf life, are a good vehicle to deliver these viable healthy bacteria at efficacious levels.

As of Dec. 14, 2012, the European Food Safety Authority did not approve any probiotic claims, and so the term “probiotic” will no longer appear on food labels in many European Union countries. That is unfortunate because clinical trials continue to show the benefits of consuming probiotics. A substantial body of evidence supports a beneficial role for specific probiotics for gut health, and there’s emerging evidence that probiotics could also aid in improving immune function and preventing infection. 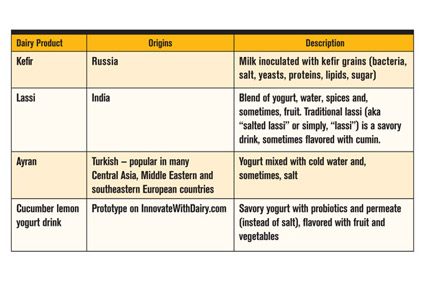 “Most claims on probiotic foods in the United States tell consumers and health care professionals very little about the science on efficacy. For example, if a probiotic has been shown to be effective in reducing symptoms of antibiotic-associated diarrhea or symptoms of irritable bowel syndrome, the [U.S.] FDA will not allow such information to be conveyed on a food product (or on the product website). Consumers cannot differentiate products with evidence from those without, because most use very general claims such as ‘helps your digestive system’ or ‘promotes immune health,’” said Mary Ellen Sanders of Dairy & Food Culture Technologies, Littleton, Colo.

Concentrated milk or whey protein ingredients are often added to cultured dairy beverages to boost the protein level and/or contribute to viscosity and mouthfeel. One recent introduction by Skyland Foods is IBEX Recovery which is fortified with milk protein concentrate and touts an optimum blend of protein, carbs and nutrients that help the body recover after a workout.

Beyond protein and probiotics, dairy manufacturers have introduced a variety of new flavors and inclusions, including rhubarb and honey flavors and fiber, grain, chia seed and nut inclusions. While most cultured dairy beverages are refrigerated, Main St. Café developed a shelf-stable yogurt smoothie fortified with whey protein.

Breakfast reigns as the projected fastest-growing eating occasion, and sales of foods eaten during the breakfast occasion are estimated to be approximately $208 billion and increasing. Another potential addition to yogurt drinks is coffee. At the 2013 IFT Food Expo in July, the U.S. Dairy Export Council introduced a Café Yogurt Frappé made with U.S. dairy protein and containing the same amount of caffeine as a cup of coffee.

Add superfruits to dairy foods to make a superfood

Milk proteins make you strong inside

Full-fat dairy is a healthy choice