Video, photos and cheese trends from the 2013 IDDBA show

Cheesemakers add herbs, peppers and other seasonings to soft, hard and cream cheeses.

View our videos from IDDBA:

Dairy Foods noticed that exhibitors were promoting spicy cheeses, raw milk cheeses and dairy-based ethnic foods at the 2013 International Dairy-Deli-Bake Association expo in Orlando, Fla., this week. And in an effort to capture the stomach-share of a nation of snackers, cheesemakers wrapped their wares in convenient, single-serve take-with packages.

Among the trends and notable introductions observed by Dairy Foods'editor-in-chief Jim Carper are:

Yancey's Fancy, Corfu, N.Y., offered a variety of flavored Cheddar cheeses, including chipotle and habanero, and steakhouse onion. Its Chastinet Asiago-style cheese is promoted as an appetizer or as a fondue ingredient. Yancey's Fancy is one of several cheesemakers touting 9-month-aged raw milk Cheddars that have the sharpness of longer-aged cheeses, but at a lower price point.

Cabot Creamery was testing a "mystery" cheese at its booth. The Vermont-based cheesemaker will name and launch the blend (possibly a Swiss-Cheddar combination) later this year. 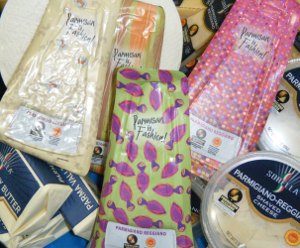 Swiss-style cheeses flavored with herb pastes (including oregano and basil) were offered by Emmi, the Swiss-based cheesemaker. (Its Wisconsin-made cheeses are sold under the Roth brand.)

Piquant blue cheese appeared in dips, dressings and by itself. California's Point Reyes Farmstead Cheese Co. has four flavors of dips for use with vegetables, on sandwiches or to make salad dressings. The flavors are blue cheese; truffle and sage; bacon and caramelized onion; and port, cherry and pistachio. The dips are sold in 6-ounce tubs.

Litehouse Inc., Sandpoint, Idaho, showed a center-cut portion of blue cheese and promoted its small-batch production and use of single-source milk that is r-BST free. It is also selling crumbles in 1-pound bags to club stores and traditional grocery retailers.

BelGioioso Cheese, Green Bay, Wis., introduced fresh mozzarella cheese in 1-ounce snack-size packaging. Each package contains three 0.33-ounce cheese portions (a cilegine size). These are sold six or 16 to a bag. The thermo-form plastic packaging rules out the need for water to keep the cheese fresh. At the other end of the size continuum, BelGioioso offers a 5-pound slicing loaf for deli customers.

President, a cheese brand of France's Lactailis, revived its Wee Brie line of 40-calorie wedges. It also exhibited its Rondele spreadable cheese in three flavors, including Pepper Medley. The company also has two new feta flavors; one with cranberries, the other combines sun-dried tomatoes and olives.

Ethnic influences on cheese products were noticed at IDDBA expo

Lioni Latticini, Union, N.J., exhibited its Burrata cheese con panna (pictured), which has a creamy center. The fresh mozzarella is filled with panna di latte and paste filata. It's sold in an 8-ounce package (and in foodservice sizes). The company suggests eating the cheese at room temperature on bread or with olives, figs, nuts or prosciutto.

Chicago's Supremo, which bills itself as the oldest family cheese company of Mexican heritage in the United States, exhibited a full complement of cheeses, creams and flan aimed at the Hispanic consumer, as well as chorizo products, sopes (a corn-based bread) and fruit-flavored dessert gelatins.

Feta is a popular cheese and exhibitors took pains to explain why their versions were better (either less salty or as salty) than those made in Greece. Domestic producer Ezra's Dairy sells feta in chunks, cubes or slices and packages them in brine. The brine drains away from the cheese as the basket is lifted out of the container. Ezra's is a brand of Bunker Hill Cheese Co., Millersburg, Ohio.

Klondike Cheese, Monroe, Wis., is one of the largest feta producers in the United States. It showed its capabilities and promoted its new Greek yogurt. Both are sold under the Odyssey label.

Tnuva, said to be Israel's largest food processor (with an office in Fairfield, N.J.), showed its dairy-based foods, including labaneh, a sour cheese spread sold plain and flavored, including piquant peppers and olive oil.

Karoun Dairies, San Fernando, Calif., makes paneer, a flavorless cheese favored by consumers with ties to India. The cheese can be fried or added to stews where it picks up flavor.

Celebrity chefs are lending their names to packaged foods. Cat Cora has a line of feta cheese (made with sheep's and cow's milk) from Gaea, a manufacturer in Greece. Grecian Delights, a food maker based in Elk Grove Village, Ill., is producing dips, spreads and flatbreads for Cora. One of the dips is a Greek yogurt spread.

New flavors, packaging for butter were found at IDDBA expo 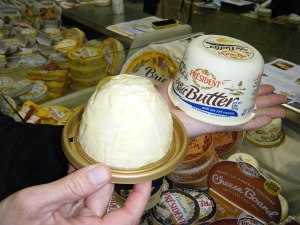