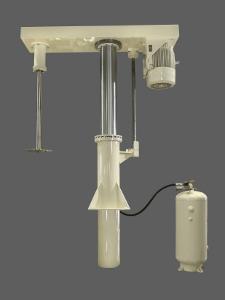 Ross manufactures a full range of High Speed Dispersers suitable for high-volume mixing in vessels up to 6,000 gallons or larger. These production-scale High Speed Dispersers are either tank-mounted or supplied with an air/oil hydraulic lift. In the latter configuration, a height limit switch enables the mixer to operate from the fully down position to a safe raised height. This allows the operator to adjust blade position as necessary to eliminate any potential stratification within a large batch as well as agitate smaller liquid volumes during the initial stages of mixing. Shown is a 100HP High Speed Disperser designed for mounting on a mezzanine and equipped with a two-position swivel-lock assembly. At the end of a mixing cycle, the disperser is raised out of the tank and rotated 90 degrees to service another vessel while the first tank is drained and set-up for the next run.