The weighted average advertised price for 48- to 64-ounce ice cream containers rose 7%. Current butter demand is good in many areas of the country. Domestic retail demand for cheese is still generally considered to be good, but export demand is slowing. And heat, humidity and record-setting temperatures are significantly impacting cow comfort and milk output, reports this week's Dairy Market News from the U.S. Department of Agriculture. 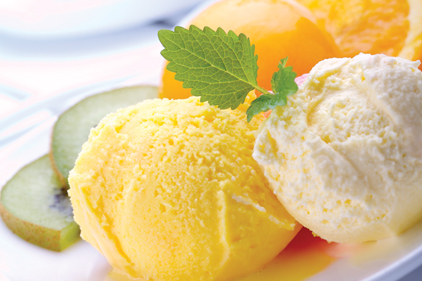 Ads for ice cream set a record this month

July Ice Cream Month promotions were common ad themes in ads this period [July 2 to 13]. While the survey picks up only 48- to 64-ounce containers, ads were scattered with features for pints and 4- to 5-quart pails of ice cream. Additionally, ice cream novelty items were common. The freezer section ads were also highlighting many types of non-dairy treats.
Fluid milk ads were higher and dairy case ads were filled with alternatives — teas, lemonades, juices and flavored drinks. Overall ad volume for conventional dairy products is slightly below two weeks ago, down 1.4%.
The weighted average advertised price for 48- 64-ounce ice cream containers is $3.22, up 7%. Ice cream is the third-most advertised category. Ice cream ad volume has set a new record high level of ads for the second consecutive survey period, being up 6% from two weeks ago, which was 19% higher than four weeks ago.

Grade AA butter prices closed at $1.55, this week. The weekly average for Grade AA is $1.5430 (+.0142).
Churning schedules across the country eased this week as overall cream supplies declined. Lower churning cream supplies are being attributed to a couple of factors; declining milk volumes and butterfat levels along with enhanced Class II demand. Butter producers did indicate that they were surprised to see that holiday cream volumes were not as heavy as projected. Much of the decline is being attributed to hot temperatures across the country, reducing cow comfort and lower milk output.
Lighter churning activity this week often did not keep pace with demand, thus many producers and handlers were reaching into inventoried stock to fulfill orders. Butter producers feel that for the next 4 - 6 weeks, churning cream volumes will be lighter and inventoried butter stocks will become more necessary to fill needs. Current butter demand is good in many areas of the country. Retail butter ads have prices ranging from $1.5900 in the Midwest to $3.4900 in Northeast and Southeast regions of the country. Some butter ads are alongside regional/seasonal sweet corn ads. Food service orders are holding steady at good levels.

Cheese exports are up from last year, but show signs of slowing

As for cheese, barrels closed at $1.68, as did 40-pound blocks at $1.68. The weekly average for barrels is $1.6580 (-.017) and blocks, $1.6540 (+.014).
Milk production and tests in all regions are declining but so far, adequate milk still seems to be available to cheesemakers for current production. However, some increase in fortification by cheese manufacturers has been noted. Domestic retail demand is still generally considered to be good, but export demand is slowing. Recent domestic cheese price levels are pricing U. S. manufactured cheese less favorably in the global marketplace compared with cheese manufactured in other parts of the world.
Still, exports of cheese and curd for May totaled 61.6 million pounds, up 43% from last year. Cumulative exports for the first five months of the year totaled 258.4 million pounds, up 18% from the same period last year. Exports account for 5.7% of total cheese production for the period noted.

Summer heat/humidity and record-setting temperatures are being reported in many regions from coast to coast. These conditions are significantly impacting cow comfort and milk output. In most all areas, milk handlers are reporting noticeable declines in milk intakes and butterfat levels. Often, bottlers and manufacturing facilities are adjusting processing schedules to accommodate declining milk volumes. Some areas of the Midwest are reporting declines ranging up to 20% compared to the previous week.