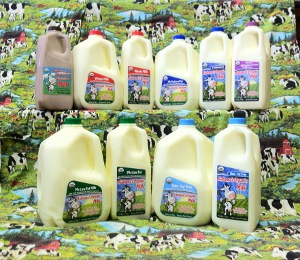 When a slow economy and low milk prices threatened to shut down their family dairy farm, Jonny de Jong and his brothers knew that business as usual wasn't the answer.

Two years ago, brothers Jonny, Mendy and Ike de Jong got into the organic milk market. Their company, Alabama's Organic Dairy Products, is an on-site milk processor at Working Cows Dairy, the farm owned by their parents Jan and Rinske de Jong, who emigrated to the United States from the Netherlands in 1985.

After studying the market and seeing consumer demand trends, Jonny, the eldest brother, said they saw more potential and stability in the organic market.

The de Jong brothers purchase the milk from their parents and process it directly on the farm using a low-temperature pasteurization process. They also bottle the milk and do most of the distribution themselves as well.

“We heat the milk up to 145 degrees for 30 minutes,” Jonny de Jong said. “That lower temperature actually allows a lot more of the living enzymes and living bacteria that are good and essential for your bodies’ well being to remain alive rather than scorching them out.”

De Jong does not homogenize the milk, which gives it a cream top. This is what sets their milk apart from most of its local competition, according to de Jong. Most organic dairies, he points out, use the ultra-pasteurization method which cooks milk at a higher temperature for a shorter time, killing off all the bacteria, and then they run it through a homogenizer. He explains that the low-temp method (which takes much longer) with no homogenizing allows the milk to stay in a “more natural state, where you still have to shake the milk before you drink it”— hence the cream top.

Alabama’s Organic Dairy currently offers fat-free, 1%, 2%, whole and chocolate milk, in half-gallon and gallon sizes. They also produce half-gallons of chocolate milk and cream. Its milk and dairy products can be found at local super markets throughout southeast Alabama and parts of northern Florida, and a few locations in Atlanta, Ga., through Whole Foods Market.

Part of the dairy’s goals in the next two months, according to de Jong is to introduce an 8-ounce single serving offering in whole, 2%, 1%, and skim and low-fat chocolate milk, as well as half & half and heavy cream. This single serving product is part of a larger goal to introduce a dairy educational program into local schools in their area. De Jong hopes to take a presentation to local schools and educate children about organic cream top milk and where milk comes from originally; as well as supplying those schools with their 8-ounce serving containers.

In addition to its milk products, de Jong said the company hopes to branch out even further in the future, getting into the ice cream, cheese and butter market.