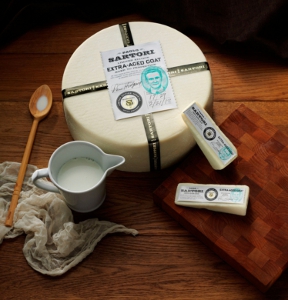 Sartori Company announced the inaugural release of their much anticipated Paolo Sartori Limited Edition Extra Aged Goat Cheese. The product has been in high demand from specialty retailers and consumers alike since it debuted at the European-hosted Global Cheese Awards in 2011. The international cheese community provided a glowing review of the new cheese – awarding it a Silver Medal at the global competition.

A Sartori original, this extra aged goat's milk cheese is well balanced, featuring savory, caramel notes and a light citrusy flavor. Touted for its highly approachable, yet "authentically goat" flavor profile, this cheese was crafted to satisfy all from the tentative taster to well-traveled connoisseur.

"Part of the secret to what makes this cheese so special is the aging," says Sartori cheesemaker Pam Hodgson. "In general, it's hard to age goat cheese without one flavor or another taking over and negatively impacting taste. We knew we could do better. It's taken us years to perfect the method, but over time we found that some special technique and aging nearly twice as long as normal allows some of those strong earthy flavors, which are natural to goat cheese, to mellow. The result is a more harmonized balance of flavor with a surprisingly creamy, smooth texture."