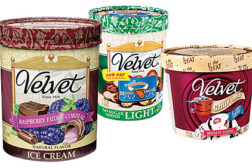 April Miller
Expect to see some new feature flavors—in both the natural and churned lines—this year from Velvet Ice Cream Co., Utica, Ohio. And while president Luconda Dager is hush-hush about other 2012 plans, she says what won’t change is the company’s continued focus on quality and value.
Read More
Subscribe For Free!
More Videos

Is dairy a cannabis candidate?

The global ready-to-drink (RTD) tea and coffee market, meanwhile, is expected to expand at a CAGR of about 5.6%, a report by Grand View Research Inc. states. Innovation could help dairy processors grab their fair share of this growth.

JK Tech Smart Dairy is an orchestrated design, solution and a framework that captures key moments of the milk journey right from the producers to the customer, and all operational activities are fully mapped to address user expectation, business challenges, Industry trends with the right technology enablement.
View All Submit An Event