How to create a more sustainable gallon jug for milk

Sustainability and the environment are becoming increasingly important to consumers who expect the products they buy, including milk, to be produced and packaged in an environmentally responsible way. In fact, a study conducted for the Innovation Center for U.S. Dairy, Rosemont, Ill., showed that frequent milk users are more engaged in environmental issues than less frequent milk consumers.

Manufacturers are responding to consumer expectations. According to Cary Frye, vice president of regulatory and scientific affairs for the International Dairy Foods Association, Washington, D.C., sustainability is "playing a big role" in the evolution of the dairy sector. Specifically with regard to packaging, Cary is quoted as saying that, "We're seeing that in packaging, with lighter packaging and more efficient packaging.” 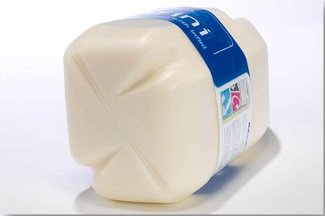 The Infini bottle (shown) from UK producer of plastic milk bottles Nampak Plastics would appear to exemplify the kind of lighter and more efficient packaging to which Cary was referring, as the company was recently awarded the accolade of ‘Green Product of the Year’ at the British Engineering Excellence Awards (BEEAs).

The Infini bottle was one of the examples I used in my presentation at the International Dairy Show in November on how to create a more sustainable gallon jug for the U.S. milk fluid market. The presentation also included a progression of ways in which the amount of plastic used in the creation of these gallon jugs can be reduced, including:

• Light-weighting through container design. 12% weight savings through optimized design alone could be possible, with a reduction from 63.6g to 56g total weight. (Source: Uniloy Milacron)

• Adding calcium carbonate as a filler to replace virgin HDPE. An addition of up to 8% calcium carbonate could be possible without affecting the recycling recovery rate. The calcium would be compounded in a master batch, and would not require changes to equipment except for the addition of a material blender. At these levels, an energy reduction of 10.6% could also be possible. (Source: Uniloy Mialcron)

• Light-weighting plus optimizing for calcium carbonate filler. This would require optimizing design to regain top load e.g. a tucked in handle and ribs on the bottom and on the shoulder. However, if this was done, a 54g bottle could be possible. (Source: Uniloy Milacron)

Since 85% of fluid milk in the United States is packaged in monolayer HDPE packaging, any reduction in the amount of plastic used can have a major impact on reducing the carbon footprint.

Focusing on light weighting as the first step to a more sustainable gallon jug is supported by a Life Cycle Analysis study on processing and packaging systems that was conducted by the Innovation Center for U.S. Dairy, which recommended light-weighting or container weight reduction as a key focus area for improvement in the supply chain impact of fluid milk. This study, the most comprehensive of its kind ever conducted in the United States, involved a multidisciplinary team of processors, government agencies and research institutes.

When it comes to future innovation, an integrated design approach appears to be the next frontier for the fluid milk market, where the minimum input is used to get the maximum use of materials at the end. This can only come about by the value chain working together, namely raw materials suppliers, equipment manufacturers, e.g. of blow molding equipment, distribution equipment manufacturers, e.g. of crate packing equipment, processors/brand owners and retailers.