Water scarcity is major threat to the food industry

Nestle's CEO raises a warning in his keynote speech in London.

Editor's note: Nestlé Chief Executive Officer Paul Bulcke spoke at London’s Guildhall in front of an invited audience of food industry and media representatives. His lecture was followed by a question and answer session with a panel of food industry specialists, chaired by Sheila Dillon of BBC Radio 4’s ‘The Food Program.’

Paul Bulcke used his keynote speech at the annual City Food Lecture in the United Kingdom to warn the food industry that water scarcity is one of the greatest threats it faces. The following text was provided by Nestle. 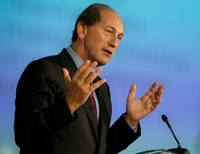 In his speech, ‘Water – the linchpin of food security’, Mr. Bulcke argued that overuse of fresh water poses not only a serious environmental hazard, but also a major risk to political and social stability.

He said water scarcity will be the cause of massive food shortages within the next 15-20 years and that now was the time for industry, governments and other stakeholders to act decisively.

Grain shortfall
“It is anticipated that there will be up to 30% shortfalls in global cereal production by 2030 due to water scarcity,” said Mr. Bulcke.

“This is a loss equivalent to the entire grain crops of India and the United States combined.

“Resource shortages lead to price increases and volatility,” he continued.

“Higher prices for staple cereals are not so much of a problem for the West, or for most people in Europe. But a price increase of more than 200% will certainly be felt when you have to spend 40 to 60% of your income on food, mostly staple food.”

Food industry challenges
Mr. Bulcke took the opportunity to highlight some of the other challenges currently facing the food industry, particularly the horsemeat crisis that has affected a number of retailers and manufacturers in Europe, including Nestlé.

“The horse meat issue affects the entire industry,” he said. “Widespread fraud is being committed by a few across Europe. I understand that many consumers and many of you in the industry feel misled, I feel the same. This should not happen, it is unforgivable. We have let our consumers down.

“The success of the food industry in general, and of companies such as Nestlé, is built on trust,” he continued. “Trust is our most important asset and we should all work hard not to lose it.

“What our industry is facing today is a trust issue. It is wrong and unacceptable that a minority has put our entire industry and all the people involved in it in such a bad light.”

Mr. Bulcke pointed out that while the food industry is often heavily criticized, it has played an important role in the global development of society in feeding millions of people with safe and nutritious products.

“Our industry has made major progress over the years,” he added. “Food has never been safer and yet, the perception is sometimes the opposite. But the current issue is not a food safety issue, it is a trust issue.

“There will be a further 2.3 billion people on the planet by 2050, adding to existing demand for food and energy,” he said.

“Already today, water withdrawals are in excess of sustainable supply, and this gap continues to widen.

“It is only by working together with policymakers, civil society, agriculture and other stakeholders at local and international levels that we can develop effective, coherent and concrete action.

“This is an issue that must be addressed urgently. I am convinced it can be solved. We should give water the right priority, the right value.”

Although reducing water use in agriculture was a major challenge he said, it was also a great opportunity to make a difference.

“More than two thirds of all the world’s fresh water is withdrawn by agriculture, but the physiological need of plants amounts to only half of this amount,” Mr. Bulcke continued. “This means there is potential to make enormous savings.”

He gave examples of the different ways Nestlé works with its agricultural partners to reduce water use, from breeding coffee plants with higher drought tolerance, to training farmers in improved irrigation and water saving techniques.

He also mentioned how the company has made savings in its manufacturing operations, reducing its water withdrawals from 4.5 liters per USD of sales ten years ago to only 1.5 liters today.

Distorting policies
Mr. Bulcke referred to use of cereal crops for biofuels as increasing demand for water and driving price increases in staple foods.

“Nestlé is not against biofuels, but we are against using food for fuel.”

Reducing waste
Mr. Bulcke pointed out that almost one-third of food produced for human consumption is lost or wasted globally, which amounts to about 1.3 billion tons per year.

He said that further water savings could be made if more was done to address food waste across the value chain - from agricultural production down to household consumption.

He said that by purchasing milk directly from farms in developing countries, Nestlé has managed to reduce losses between farm and retail by up to 1.4 million tons annually, an “enormous saving” compared to traditional milk supply chains.

Manufacturers could also do more to help consumers in industrialized countries reduce the amount of food they throw away, for example by offering products in smaller portions.