This website requires certain cookies to work and uses other cookies to help you have the best experience. By visiting this website, certain cookies have already been set, which you may delete and block. By closing this message or continuing to use our site, you agree to the use of cookies. Visit our updated privacy and cookie policy to learn more.
Home » Can these ‘magnificent 7’ save milk? DMI thinks they have a good chance
Dairy Processor News
Once you've met them, you'll never forget them

Can these ‘magnificent 7’ save milk? DMI thinks they have a good chance

Past advertising efforts were essentially generic and acted as disincentives to dairies to invest in promoting their own brands. “Brands understand they need to step up,” Gallagher said.

If they succeed in selling more milk, then perhaps they’ll be known as The Magnificent Seven. Dairy Management Inc. today said it is supporting the efforts of seven partners to sell more milk in the coming years. The partners are: 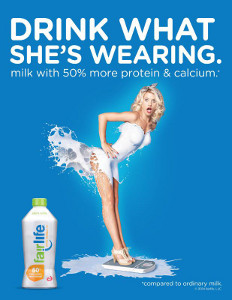 DMI, Rosemont, Ill., which is funded by dairy farmers through the checkoff program, said it is assisting in product development, consumer insights, nutritional consulting, technical and formulation support and introductions to perspective marketplace partners.

The partners were selected because they “represent marketplace leaders,” according to a press release. They are investing more than half a billion dollars in capital and other resources, according to DMI.

Speaking from DMI’s board meeting in Grapevine, Texas, DMI CEO Tom Gallagher told reporters on a conference call that the industry needs to meet the needs of consumers. Without naming specific companies or the products they are developing, he said new products could be extended-shelf-life milks, high-protein beverages, flavored milks and milk packaged in smaller containers than gallons.

He did say that Fairlife (which is distributed by Coca-Cola) is going national with its high-protein (13 grams per cup) milk sold in 52-ounce bottles. Fairlife was test marketed in Minneapolis and Denver earlier this year. The lactose-free, lower-calorie milk will benefit from “the full weight of Minute Maid’s chilled distribution system,” Gallagher said. Minute Maid is another unit of Coca-Cola.

The goal is to re-ignite sales of fluid milk

DMI Chairman Paul Rovey, a dairy farmer from Arizona, said farmers are excited about “re-igniting fluid milk.” He and Gallagher acknowledged that sales won’t come back in a day. Results from the partnerships with the seven dairies will take years before showing an impact. DMI’s hope is that the seven current relationships will be “catalytic” and that other milk processors will decide to invest in plants and product development.

Gallagher said that while past advertising efforts from MilkPep and California Milk Marketing Board won awards, they were essentially generic. They actually acted as disincentives to dairies to invest in promoting their own brands.

“Brands understand they need to step up,” Gallagher said.

DMI expects growth to come from former milk drinkers coming back to the category and from those drinking alternative beverages. Gallagher noted that one of two Americans over the age of 18 do not drink any fluid milk. “We have to bring people back and keep them in the category,” he said.

(MilkPEP previously has acknowledged it has given up on trying to convert non-milk drinkers to dairy. Its strategy has been to promote white milk for breakfast and chocolate milk for post-workout recovery.)

Rovey added that Fairlife brought consumers back to the milk category and Gallagher said consumers turned away from almond, soy and coconut milks to Fairlife.

In response to a question from Dairy Foods, Gallagher said DMI is also promoting other dairy categories, such as cheese. Rovey said that dairy farmers see a “huge” opportunity in milk but “we’re not leaving the other categories.”

Can chocolate milk save the industry?

Can technology save fluid milk?