Many roads lead to sodium reduction in cheese products 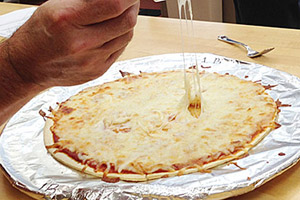 Reducing sodium in cheese products requires innovative, research-based solutions. While some varieties of cheese have traditionally been difficult to manufacture with lower sodium levels, the dairy industry and researchers have been working to find solutions that reduce sodium in products from pizza to table cheese.

In particular, researchers at the Center for Dairy Research have been working to create a reduced-fat and low-sodium pizza that includes a low-fat/low-sodium crust, sauce and cheese. So far, these efforts have been successful, yielding a product with significantly lower sodium levels. In fact, the whole wheat crust developed at CDR has a 40% sodium reduction and is baked with dairy permeate as a salt replacer.

You may recall from a previous column that permeate is a by-product of the membrane filtration processes. Permeate contains milk minerals, such as sodium, calcium, potassium and magnesium, organic acids and lactose. This broad range of different minerals in permeates helps to provide a salty flavor and reduces the levels of traditional salts (sodium chloride) needed. The sauce has a 50% reduced-sodium level which, again, is possible through the use of whey permeate (labeled as “dairy solids”) as a salt replacer.

Finally, the cheese used on the pizza itself is actually a blend of a shredded low-fat mozzarella-style cheese developed at CDR with commercial brick or Muenster cheese. The low-fat cheese was made at CDR using a patented process. Essentially, a skim-milk cheese base is manufactured by direct acidification and emulsifiers are added during a curd heating step. No sodium phosphate or citrate emulsifying salts are added, meaning that the only sodium in the cheese is from the skim cheese base.

The end product is a low-fat, low-sodium mozzarella-style cheese that can be used as an ingredient cheese. This cheese is low in fat (<6%) and sodium, but it is not particularly flavorful. Therefore, CDR staff blended it with brick or Muenster cheese. This combination provides minimal blistering and a creamy, buttery taste without adding significant amounts of salt or fat to the pizza. In fact, the combination can be less than 275 milligrams of sodium, which is below the 280 milligram sodium limit outlined by the United States Department of Agriculture for the designation of low sodium.

The combination of cheeses is also less than the 10.8% fat limit established by USDA which means that the pizza cheese can be used in school lunch programs. This pizza solution received favorable reviews at the annual CDR Industry Team meeting.

Within the cheese industry, manufacturers are also now able to achieve a gradual reduction in the sodium levels in Cheddar and similar style table cheeses. Research has shown that for Cheddar the salt content can be successfully reduced from 1.8% (typical levels) to 1.2% while still maintaining a safe and typical flavored cheese.

Cheddar type cheeses with salt levels of 1% have been made and primarily used as an ingredient (not table cheese). Additionally, the use of new enzymes/rennets, like camel chymosin, has been an area of research to offset bitterness that can be common in low-sodium cheeses.

Potassium chloride has also been explored as a salt replacer. Studies show that a 25% replacement of sodium chloride can be achieved with potassium before most individuals will notice a change in flavor (although some individuals/consumers are sensitive to even lower substitution levels, and they mention a chemical/metallic off-flavor).

Other approaches that are being explored include: addition of flavor enhancers (often providing savory notes, since reduced/low sodium cheeses are often bland), use of fermentates (containing organic acids and antimicrobials, to help reduce the risk of unwanted pathogenic growth) and the use of selected starter adjuncts (to help provide more cheese flavor). Low-salt cheese can also be more acidic and strategies to avoid this situation include reducing the lactose levels in cheesemilk, or increasing the buffering capacity of the cheese curd by fortification with additional milk protein.

Truly, sodium is an essential ingredient in cheese, both for safety reasons as well as taste and functionality. So far, there have not been many retail products introduced onto the U.S. marketplace claiming a very large reduction in sodium, but gradual reductions in sodium have been observed. As such, successfully achieving reduced sodium levels in cheese will continue to require innovative solutions and more research into possible process modifications. It’s up to the industry and researchers to discover not only what limits are possible, but also what limits are safe and acceptable to consumers.

The advantages, disadvantages of pasture-fed cow’s milk for cheese

Fend off bacteriophage in cheese plants

John A. Lucey is a professor of food science at the University of Wisconsin, Madison, and the director of the Center for Dairy Research.

Kraft says it is meeting its sodium-reduction goals in cheese, other foods

The effects of reducing sodium in cheese

Research shows how to reduce sodium in cheese