Shown in the below photo is a Single Axis Control System in a NEMA-4X stainless steel enclosure for soft start and variable speed control of a Ross Ribbon Blender. A 4-inch color touch screen is mounted on the panel door for control and viewing of agitator speed, load, cycle time and forward/reverse agitator direction. A variable 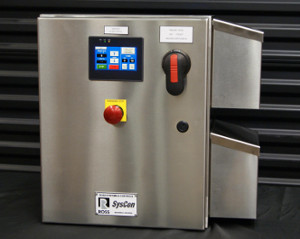 About Ross SysCon
Ross SysCon is one of five US manufacturing facilities under the Ross group of companies. Ross, a manufacturer of mixing, blending, drying and dispersion equipment, also operates three international plants in China and India. For more information on Ross equipment and controls or to speak with a specialist about your application, call 1-800-243-ROSS(7677).