In New Zealand, schools collect empty milk packs, which are then recycled into books, roof tiles and other items. 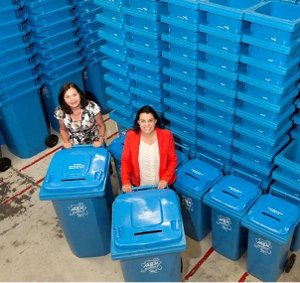 Hundreds of blue recycling bins are heading to New Zealand's South Island to be delivered to schools joining the Fonterra Milk for Schools program.

Almost 3,000 recycling bins have been made so far by New Zealand manufacturer SULO Talbot, which is providing discounted bins made of up to 60% recycled milk bottles for Fonterra’s nationwide school milk program.

Karen Murray, General Manager SULO Talbot, said the company is proud to support Fonterra with such an important aspect of its school milk program.

“We want to teach children about the importance of recycling – that it is more than just a feel-good service. Each of the wheelie bins provided in the classrooms is made out of recycled material making a huge difference towards the ideal of a zero waste society,” she said.

“Fonterra has reduced its solid waste footprint in New Zealand by 92% over the last 10 years, and we've designed the Fonterra Milk for Schools recycling program with the aim of reducing this amount further.

“Recycling is collected by Fonterra and sent to accredited recycling facilities in Thailand and Malaysia to be turned into things such as floor boards, roof tiles, paper and school books.”

Samples of the roof tiles that the milk packs are recycled into will be provided to every school so that the kids can see what their empty milk packs will become.

Robinson said each school will also be visited by a Fonterra team member to talk about various aspects of the program including recycling.

“Schools will be given quick guides and a video which explains the recycling process and shows the children how to fold their milk packs to seal and make them smaller, reducing the amount of space taken up for storage and transportation,” she said.

Canterbury schools that have indicated interest in Fonterra Milk for Schools will start receiving their application packs from the Co-operative. This follows last week’s invitation to Southland and Otago schools as the program begins its nationwide rollout, starting in the south of the South Island before working its way up the country.