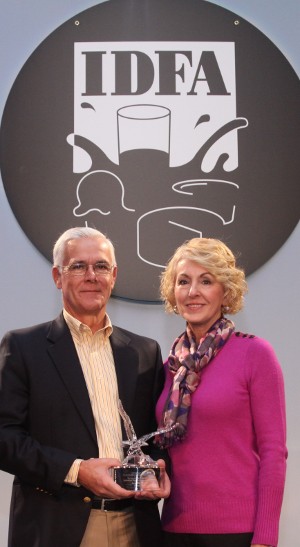 Dave Fuhrmann, president and CEO of Foremost Farms USA, received a Soaring Eagle award from the International Dairy Foods Association during its 2012 Dairy Forum at La Quinta Resort & Club in La Quinta, Calif. The Soaring Eagle award recognizes the extraordinary service of leaders in the dairy industry and those who have provided exemplary leadership to IDFA, the International Ice Cream Association, the Milk Industry Foundation and the National Cheese Institute.

Raised on a Wisconsin dairy farm, Fuhrmann is a 37-year veteran of the dairy industry. In 2001, he became the second president of Foremost Farms USA, a cooperative headquartered in Baraboo, Wis., and owned by 2,100 dairy farmers in the Upper Midwest.

"In the dairy industry, there's a diverse mix of folks, and Dave is one of the rare individuals who's able to mix the co-operative world with the proprietary world," said Jon Davis, NCI chairman and CEO of Davisco Foods International, Inc. "Watching Dave interact in meetings and watching him lead with his intellect and experience makes you want to get more involved and follow his lead."

Commending Fuhrmann on his NCI leadership, especially during the past two years, Tipton said, "You've done a terrific job of leading us through all those federal order issues and other dairy policy issues. The industry owes you a great debt."

A video honoring Fuhrmann for his service is available at IDFA's YouTube channel.